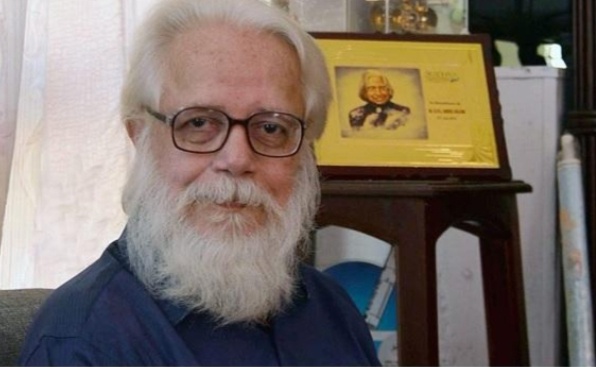 Book “Ready To Fire: How India And I Survived the ISRO Spy Case”, by Nambi Narayanan and Arun Ram, published by Bloomsbury is now being discussed in the media for the role of IB and RAW in implicating some innocent people for spying against India.

Those included in this espionage case was renowned scientist,   Nambi Narayanan, who was abused with slurs and physically tortured at third degree level by the sleuths of the investigative departments.

The IB and RAW sleuths only wanted a Muslim name from the director of the cryogenic project lab of the Indian Space Research Organisation (ISRO), Nambi Narayanan to give him freedom of life.

The innocent scientist said, he knew only two Muslims in the world, one was APJ Abdul Kalam, the rocket-man of India and other his childhood friend Abubakar.

The investigating officers may have done the “Delhi police act”, but realized that these names do not fit in their story and wanted any other Muslim name that can be related to Pakistan.

It all began with the arrest of a Maldivian woman, Mariam Rashida, in October 1994, on the charges of overstaying her visa that led to the surprise arrests of Narayanan, the ISRO scientist, his deputy and several other persons.

In late 1994, two ISRO scientists in Thiruvananthapuram, including Nambi Narayanan, two Maldivian women and two businessmen from Bengaluru were arrested by Kerala Police on charges of spying.

They were accused of having worked as a group and having sold drawings of ISRO rocket engines, and of transferring and passing on rocket technology to Pakistan.

The Intelligence Bureau (IB) stepped in and began interrogation in this high-profile case. The IB wanted to unearth a grand design of espionage, but thanks to the CBI that later came into picture and found no evidence in any of the charges. The courts accepted the CBI report and discharged all the accused.

The day was November 30, 1994. The previous month, the Kerala Police had arrested a Maldivian woman, Mariam Rashida for overstaying without a visa later when they found the number of ISRO scientist D Sasikumaran in her diary, the cops got suspicious. They charged her with espionage and went on to arrest Sasikumaran. They also arrested Rashida’s friend Fouziyya Hassan, a Maldivian national and two Bangalore-based businessmen.

They were all charged with conspiring and selling drawings of ISRO’s Vikas engine and cryogenic technology to Pakistan.

On November 30, Nambi Narayanan, then the director of the cryogenic engine project at ISRO, was also taken away for interrogation.

“Ready To Fire: How India And I Survived the ISRO Spy Case,” by Nambi Narayanan and Arun Ram, Bloomsbury gives a graphic account of the interrogation details.

‘Give us any Muslim name’: how authorities tried to build a false spy case against Nambi Narayanan graphically mentions the book.

In his memoir, the scientist who was falsely accused of selling secrets from ISRO programmes recalls the brutal and malicious interrogations he faced.

“We have proof that you sold the nation’s secrets, rocket technology to Pakistan. Now we want to hear that from your mouth. Tell us how did you do it? How much filthy money did you get?” the interrogators asked Nambi Narayanan.

“Selling sensitive rocket technology to Pakistan is an offence under the Official Secrets Act, punishable with a fourteen-year sentence,” told the interrogators to Nambi.

The interrogator asked him; “When did you first meet Mohammed Aslam of Pakistan?” and added ‘Mohammed Aslam is a well-known nuclear scientist from Pakistan. He came to India and struck a deal with you for rocket technology in 1985. Now accept it,” they put pressure on Nambi.

“Why Pakistan would send a nuclear scientist to get rocket technology. What’s the connection with a scientist? Nambi asked them and said, If India wants to do espionage on Pakistan, would it send APJ Abdul Kalam or U R Rao for that? Wouldn’t it be safer to send an unknown person? Does your story make sense to yourself?” Nambi Narayanan told his interrogator.

“Don’t worry. You just give us any name. Give us a Muslim name,” IB interrogator insisted from Nambi Narayanan, if he wanted his life back.

“These bunch of goons who masqueraded as IB officials, wanted me to do anything against my motherland? After all, it was Vikram Sarabhai’s dreams and convictions that I followed to serve my country. I cannot let down Sarabhai, my father, my gurus and myself. I resolved to die if that was the way out of this mess. I wondered what Vikram Sarabhai would have done in these circumstances.” Nambi Narayanan recalls in his memoir.

“Mr Nambi, we know nothing of this sort happened, but we want this story corroborated by you. Also remember that we (R&AW and IB) submit different, independent reports to the higher ups.  All you have to do is mention the name of a Muslim friend,” the IB interrogator insisted.

“With me naming Abdul Kalam and then Abubaker, my childhood friend,” the ISRO scientist writes in his book while summarizing the IB story.

“I was not sure if I had to laugh or cry. Probably sensing that I was silently ridiculing the lack of logic in their concocted tale, the senior officer became blunt and again asked me for a Muslim name.

“It was now getting clear to me that these intelligence bureau men with visibly low intelligence had woven a story or an imaginary case of spying, but it was riddled with holes. They were seeking information to add muscle to that weak skeleton, with basic information about our working style and contacts. They wanted names, incidents and connections between them. They were constantly amending their story of fiction, and, in fact, I was inadvertently helping them make these changes to make their version a slightly less absurd one. I then decided to stop clarifying and educating these morons, and stick to bare answers.”

To cut the long story short, all the six accused in the ISRO spy case of 1994; Mariam Rasheeda, Fauziyya Hassan, D Chandrasekhar, D Sasikumaran, S Nambi Narayanan and SK Sharma were exonerated from the spying charges.

Even though the story has long been forgotten and the scars that has been left on  Nambi Narayanan is healing over a period of time, however woven in this story is the Muslim angle that needs to be introspected.