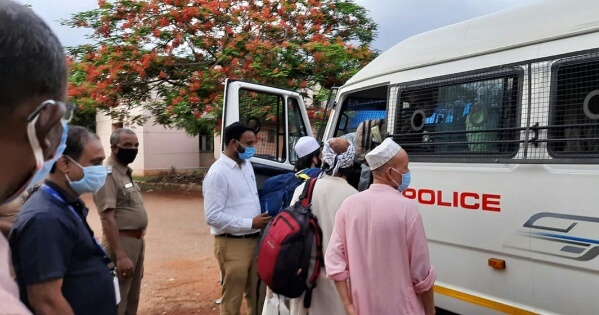 Chennai/ New Delhi:  Finally all the 129 foreign members of Tablighi Jamaat including 12 women from 9 countries on Tuesday walk free  from the  detention center where they have been kept illegally despite they have been granted  bail by the court. The Tamil Nadu government on Monday informed the Madras High Court that all the Tablighi members put in detention center will be shifted soon to Tamil Nadu Haj service society in Choolai area in Chennai.

Tamil Nadu Muslim Munnetra Kazhagam (TMMK) has played key role in this matter and  initiated legal proceedings to ensure their release and repatriation who have been ‘imprisoned’ by the Tamil Nadu Police on ‘false’ charges.

Tamil Nadu State Public Prosecutor A Natarajan told the High Court that “They have been “detained” for various lockdown violations and for involving in preaching of their faith violating visa conditions. So far 14 FIRs have been registered. Now the state has decided to accommodate them in the society in Choolai. It has 89 rooms and a separate place for women”.

He made the submissions on the plea seeking a direction to the state to release the Tablighi Jamaat members, who are currently put in detention camp for foreign prisoners.

Opposing and countering the PP’s submission, senior advocate for the petitioners Ajmal Khan contended that all the detainees are foreign nationals and they do not know the regional language. When this was the case, how could they be involved in religious preaching? He asked. Recording the submission, a division bench, comprising Justices N Kirubakaran and V M Velumani adjourned the hearing to July 20.

Because of TMMK’s legal proceedings, 98 of them were granted bail and  for the rest  31  the Madurai bench of the Madras High Court on June 12,  2020 had closed the cases filed against them and directed the government to aid in their repatriation.

TMMK president, Prof M.H. Jawahirullah told Muslim Mirror that in violation of the court order, the 98 tourists who were granted bail and the 31 acquitted were bundled in the juvenile prison of Puzhal Jail which can accommodate only 30 people designating it as a special Camp.

The Federation of Muslim Organizations and political parties of Tamilnadu had briefed  several times to the Chief Minister that his government’s action was in clear violation of the judicial orders. They urged the CM that these foreign Muslim guests need to be accommodated in either a Muslim Educational Institution or the Tamil Nadu Haj House. The government had not responded positively and even demand of the leaders of the Federation to meet the Chief Minister had been ignored.

In a press conference held through video conferencing on June 25, the Federation leaders highlighted that the government stand to detain these tourists in Juvenile prison of Puzhal Jail was not only against the judicial orders but also in violation of the central government directives on special camps.

I had also given an interview to The Hindu and The Wire regarding the plight of these foreign tourists, said Jawahirullah and added that “Then we had also taken forward a twitter campaign to highlight the plight of these tourists which had got 14th position in the All India Trending level.”

These leaders had responded effectively by issuing press statements for the release of these 129 guests from foreign countries. However all these appeals fell on deaf ears, he added.

When there was no response from the state government, TMMK  announced for a state-wide agitation on July 10 -14  picketing  Government offices to demand:

(i) The closure of all cases and repatriation of all the foreign guests based on the June 12 Judgment of the Madurai bench of the Madras High Court and (ii) Shifting of all the 129 foreign guests detained in Puzhal Jail to a better accommodation like a Madrasa or the Tamil Nadu Haj House till they are repatriated.

This announcement bore the fruit as the Chief Minister on July 11 had convened a meeting of the officials to discuss the issue and in which he  clearly instructed the officials to shift all the 129 tourists to a better accommodation. As a result the government officials have shifted the foreign Tablighi brethren to Tamil Nadu Haj House in Choolai.

After the announcement of the state government, we temporarily called off the state- wide agitation slated on July 14 as one of our demands has been accepted, he said.

But still one more demand is pending that is the acquittal of all the foreign guests based on the judgment of 12 June of the Madurai Bench of the Madras High Court.

“If the state government does not accept our genuine grievances, we have no other option but to resort to protest” Jawahirullah warned.