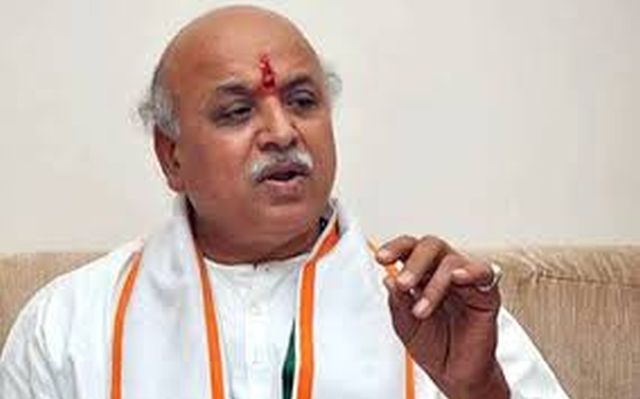 Gandhinagar : Former VHP leader Pravin Togadia on Monday said he will hold an indefinite fast, as planned, from Tuesday for the construction of the Ram Temple in Ayodhya and also took a dig at Prime Minister Narendra Modi.

“The VHP had been saying that once we (Sangh Parivar) have a majority in Parliament, we will pass a bill to facilitate the construction of the Ram Temple. The VHP even asked the people to make sacrifices to perform ‘kar seva’ in Ayodhya. Nearly 60 persons sacrificed their lives whereas thousands of others from Gujarat contributed a lot for the cause,” he said.

Taking a dig at Modi, the former VHP leader said: “Soldiers are not safe on the borders, farmers are committing suicide; our girl child is not safe in our homes; and the Prime Minister has gone on a foreign visit.”

Togadia was the Vishwa Hindu Parishad (VHP) chief for 32 years.

Togadia invited present VHP head Vishnu S. Kokje to either join him in the fast or put pressure separately for a bill in Parliament to facilitate the temple’s construction.

Asked if he will form a new organisation, Togadia said: “Everything will depend on the situation after the fast.”

On Monday, Rashtriya Swayamsevak Sangh (RSS) leaders Chintan Upadhyay, Yashwant Chaudhary and Hareshbhai Thakkar called on Togadia for an hour-long meeting. While the RSS leaders termed it a courtesy call, Togadia said: “They had come for a courtesy meeting but when the topic of fast came up, I told them I am merely following the principles of RSS.”

“Ram Mandir is not a personal issue. I even left a flourishing medical profession for this mission of temple construction and introduction of a Uniform Civil Code in the country,” he said after the meeting.