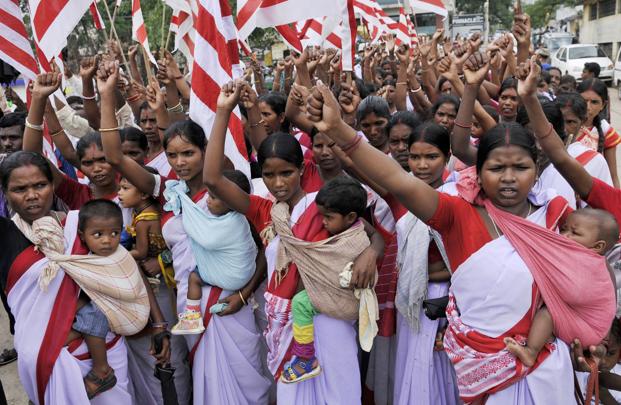 New Delhi: In  a move that might unnerve the RSS mission’s to club   around 150 million  Adivasis (aborigine people)  into Hindu fold,   Jharkhand Assembly this week passed  a resolution  unanimously  seeking  separate Sarna Code’  in the forthcoming census. Adivasis across the country are agitating for the inclusion of a separate tribal religion code in the upcoming 2021-22 census as at present, they are not classified as a separate religious entity.  A host of organizations also filed petitions in Madhya Pradesh High Court pleading separate religious code.

Jharkhand, Chief Minister, Hemant Soren moved the resolution for the provision of separate Sarna Code’ for tribals. It was passed unanimously in the state legislature.

During the discussion in the Assembly, CM Soren said that there have been attempts to make tribals extinct as no governments had showed any seriousness on the issue. The most prominent reason for the drop in the numbers of tribal population is their mental immaturity, he said.

The CM said he wanted no politics on Sarna Code and expected all support from the Opposition parties on the issue who’s Jharkhnad Mukti Morcha (JMM) is leading the coalition government in the state.

“Sarna Code is important for the tribals and government is committed towards it,” said Soren and added it will send a good message in the Country.

However, opposition leaders, mainly BJP leaders who lost the power last year, alleged the state government is doing politics on the issue.

“I wanted to raise some technical issues related to the proposal, but I was not given time to speak in the House.”

It is to be noted that demand for a separate ‘Sarna’ religion was growing among the population for many decades.‘ Sarna’ followers are nature worshippers who do not consider themselves Hindus and have been fighting for a separate religious identity for decades.

On September 20, Adivasis from Jharkhand staged a massive protest, forming a huge human chain that included hundreds of people from villages, towns, blocks and panchayat wards, and many organizations and committees as well.

Why tribals want a separate religion code in the census?

According to the Constitution of India and government reports, Adivasis have cultures and traditions different from other religions.

As per the 2011 Census, Adivasis account about 9.92 percent of the country’s population that 120 milion it is worrisome that in spite of this, they are not counted as a separate religion in the census. In Jharkhand, Adivasis make up nearly nine million   people out of the total population of 35 million crores.

Under British rule, there was a separate ‘Tribal Religion’ code that Adivasis could write themselves under this. It   was included in the 1951-52 census after independence but was abolished in the 1961-62 census. The demand for a separate religion code has been gaining momentum again.

Tribal leaders across the state have been demanding the implementation of the Sarna Code in census surveys, which would allow the tribals to be identified as followers of the Sarna faith during the census of 2021 which is round the corners, tribal outfits were exerting pressure on the government to bring the legislation. So far, the census surveys have included them as “others” in the religion column.

While the RSS is on a mission to ensure that Adivasis put down their religion as ‘Hindu’ in the upcoming census so that the population numbers of Hindus increases.  The truth is that the Corporate-funded RSS-BJP government has its eyes on Adivasi’s land, water, and forest resources. They are attempting to reduce the population of Adivasis by listing them as Hindus so that their community becomes so weak that when the corporates attack their land, water, and forest resources, they are not even able to resist.

Seva Bharati, an RSS-affiliated organization, has been trying to establish Hindu rites and rituals in tribal-dominated areas under the banners of Vanvasi Kalyan Kendra and Vanbandhu Parishad. Ratan Tirkey, an expert in Adivasi issues, said the RSS is of the view that the percentage of Hindus in the total population of the country has come down due to the Tribals stating their religion as ‘other’ in the census.

Tribal affairs expert, Yogo Purti opined that the decision to exclude the Tribal religion column or Sarna religion column from the census is attempt that has been going on for several decades to destroy the core of their religion, faith, language, traditions, culture, and identity as a community.  He claimed that the tribals are the third-largest religious group of the country after Hindus and Muslims with a population of more than 150 million people.

“The separate religion code that is a marker of the national tribal identity was included on paper from the years 1871 to 1951. However, its abolition was a political conspiracy in independent India,” Purti said. At present, there are separate religion columns for many other groups including Muslims, Sikhs, Christians, Jains, Buddhists, Persians, Jews, Lingayats, etc, but to only exclude the separate religion column of the Adivasis is an attempt to deprive them of their constitutional and fundamental rights.

In southern state of  Karnataka, Lingayats   have been also demanding separate religious identity from Hindu religion.  Lingayat religious leaders   pointed out that   during the British rule, Lingayat religion was recognized as a separate religion. They claimed their population is around 70 millions spreading in Karnataka, Tamil Nadu, Telangana and Maharashtra.  In 2018, then Karnataka government led by Congress passed a resolution declaring Lingyats as minority community.

‘We are not Hindus’ say Adivasis, launch campaign across India for separate ‘Tribal Religion’ in upcoming census