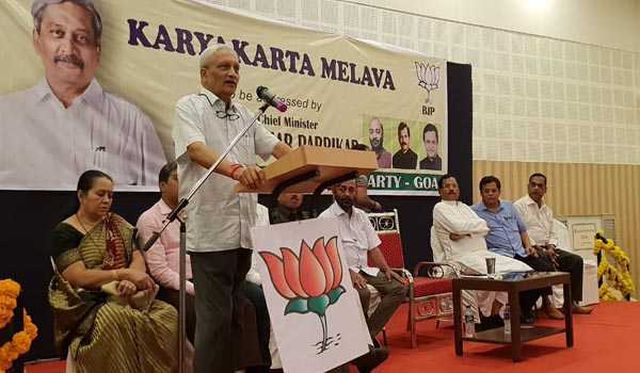 Panaji : There is no practice more inhuman than triple talaq, Chief Minister Manohar Parrikar said on Monday, claiming that Muslim women in Uttar Pradesh helped the BJP sweep the state polls after the passage of a law against the practice.

Speaking at a meeting of party workers here, Parrikar asked the party cadre to reach out to the minority communities and dispel their baseless perceptions due to fake news, adding that the phenomenon of fake news would gather momentum as the Lok Sabha elections approach.

“We will have to approach the minorities. There are efforts to inflame passions… Triple talaq is inhuman. There is no practice more inhuman than triple talaq. Even the Supreme Court has passed strictures against it. When Modi ji brought the law after the Supreme Court verdict, it too was obstructed,” Parrikar said.

“In Uttar Pradesh, Muslim women supported the Bharatiya Janata Party in a big way because they had to suffer due to the practice. It is not that it (triple talaq) is prevalent only among the uneducated and poor. It happens in educated societies too,” the Chief Minister said.

“In the Information Technology age, you keep getting information on Facebook, along with fake news. We read in newspapers about lives lost in several places on account of fake news. The responsibility of BJP workers therefore has increased. As elections near, you will get different kinds of fake news. Accusations will be made purely for the purpose of publicity,” he said.