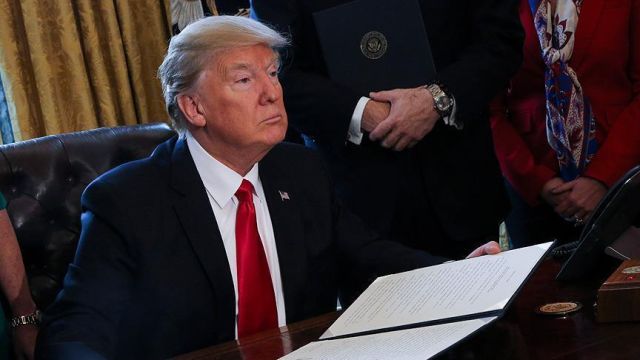 Washington : US President Donald Trump said on Thursday that the summit scheduled with North Korean leader Kim Jong-un on June 12 in Singapore has been cancelled.

In a letter to Kim, Trump said he made the decision based on the “tremendous anger and open hostility” in a recent North Korean statement.

The meeting, which would have marked the first face-to-face encounter between a sitting US President and a North Korean leader, was set for June 12.

The news came as North Korea made a show of dismantling a nuclear test site, but also on the heels of some sharp words from the North Korean government about America’s denuclearization demands.

North Korea had abruptly cancelled talks with South Korea out of anger over joint military tests with the US in the Korean peninsula.

While Trump had repeatedly played up the historic significance of the meeting, he also often leavened his optimism with a cautious “we’ll see”.

Much of the letter was written in conciliatory terms, including praise for North Korea’s recent release of three American prisoners, Trump also appeared to issue a threat that conjured memories of his war of words with Kim last year.

“You talk about your nuclear capabilities, but ours are so massive and powerful that I pray to God they will never have to be used,” Trump wrote in the letter tweeted by White House.

Trump left the door open for arranging a new meeting with Kim.

“If you change your mind having to do with this most important summit, please do not hesitate to call me or write,” the President wrote. “This missed opportunity is a truly sad moment in history.”

Trump said it would be “inappropriate” to hold the summit as scheduled in Singapore, adding he was very much looking forward to meeting him “some day”.