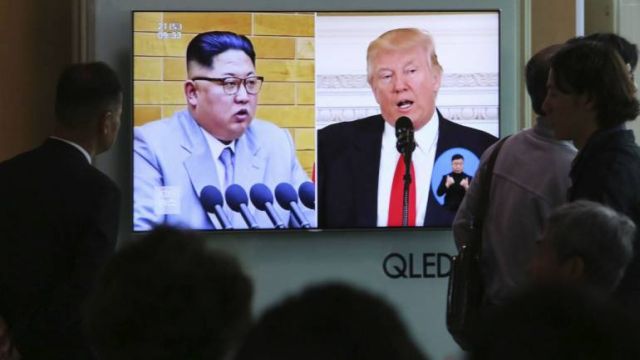 Washington : US President Donald Trump said on Friday that a nuclear summit with North Korean leader Kim Jong-un could still take place as scheduled on June 12, just one day after he cancelled it blaming Pyongyang’s “open hostility”.

“We’ll see what happens. It could even be the 12th,” Trump told reporters on the South Lawn of the White House before leaving for the US Naval Academy to deliver a commencement address.

“They very much want to do it. We’d like to do it. We’re going to see what happens,” he was quoted as saying by the US media.

Earlier, North Korea issued a conciliatory statement in response to Trump’s decision to scrap his meeting with Kim.

“We reiterate to the US that there is a willingness to sit down at any time, in any way, to solve the problem,” said a top official at the North Korean Foreign Ministry.

“We will soon see where it will lead, hopefully to long and enduring prosperity and peace. Only time (and talent) will tell!”

Asked earlier whether the North Koreans were playing games, the US President acknowledged they were — and suggested he was too, CNN reported.

“Everybody plays games. You know that,” he said when asked about the ongoing talks. “You know that better than anybody.”

Minutes before his Friday tweet, Trump claimed Democrats were “rooting” against his administration in its negotiations with North Korea.

“Democrats are so obviously rooting against us in our negotiations with North Korea… Dems have lost touch!”

He wrote a letter on Thursday to Kim informing him that their June 12 meeting in Singapore was off due to Pyongyang’s “open hostility” towards Washington.

After the news the summit was called off, Democrats criticized Trump for the decision. House Minority Leader Nancy Pelosi told reporters that the cancelled summit was “a good thing for Kim Jong-un”.

Republicans, however, hailed the President’s action as a tough negotiating move.

Trump’s comments fuelled the uncertainty and confusion surrounding his attempts to broker a nuclear agreement with North Korea.

A senior White House official said that it would be extremely difficult to hold the summit on the original date, especially because North Korea cut off contact with the US regarding planning and logistics.