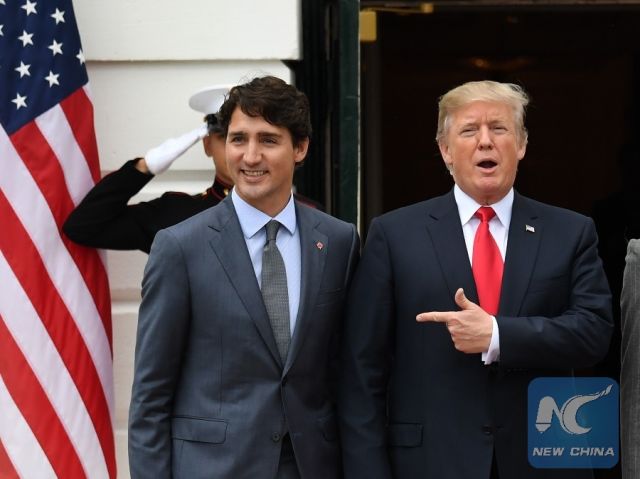 Washington : US President Donald Trump on Tuesday spoke with leaders of France and Germany on the expulsion of Russian diplomats.

Earlier on Monday, he also spoke with Canadian Prime Minister Justin Trudeau to coordinate stances on the issue.

The three nations on Monday announced to expel Russian diplomats over the poisoning attack of former Russian double agent Skripal and his daughter in Britain’s southwestern city of Salisbury on March 4.

In his call with Macron, Trump and the French top leader expressed support for the West’s “strong response” to the Russia-related incident, including the expulsion of a large number of Russian intelligence officers on both sides of the Atlantic.

In the call, Trump also stressed the need to intensify cooperation with Turkey with respect to shared strategic challenges in Syria.

In a separate call with Merkel, Trump reaffirmed with her the cooperative relationship between the two countries.

Both leaders praised the joint announcements from North Atlantic Treaty Organization Allies, EU member states and other countries to expel “undeclared Russian intelligence officers” in solidarity with Britain and in response to Russia’s alleged use of chemical weapons, said the White House.

Russia has denied any involvement in the poisoning of Sergei Skripal and his daughter Yulia.

Earlier on Monday, Trump spoke with Trudeau to affirm the solidarity of both countries with the UK and discuss the joint expulsions of Russian intelligence officers in response to Russia’s alleged use of a military-grade chemical weapon on the United Kingdom’s soil.

The White House said in a separate statement that Russia’s behavior “is the latest in its ongoing pattern of destabilizing activities around the world.”

On Monday, at least 137 Russian diplomats were ordered out by 24 governments, including 60 Russians from the US.

William Courtney, adjunct senior fellow of RAND Corporation, said that West-Russia relations will become more strained, but the West is willing to run this risk.

In his protest, Russia Ambassador to the US Anatoly Antonov said that Moscow will give adequate response with regard to each case in the coming days.

The Russian Foreign Ministry also said later that the West’s expulsion of its diplomats is an unfriendly step, and vowed to react accordingly.