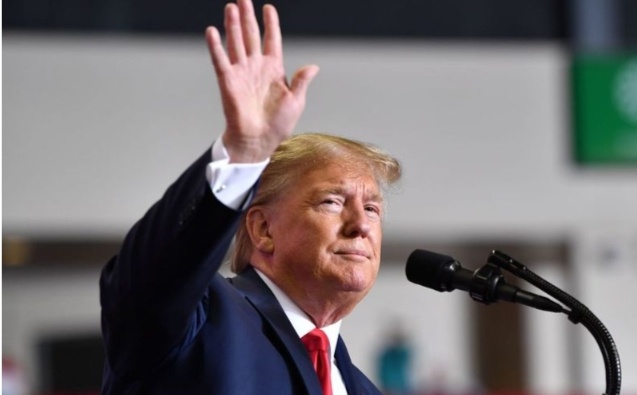 Donald J. Trump of the opposition Republican Party won the presidential race against the ruling Democratic Party candidate Hillary Clinton in November 2016 who had three million more votes than Trump, but lost in the Electoral College having 538 decisive votes, in which Trump secured 306 electoral votes. Electoral College is confined to few right leaning States where till recent whites have been in majority. Trump won because he was the choice of predatory capitalist corporations and the Zionists.

Throughout his 4-year tenure, Trump pursued hate and fascist policies. Believing in absolutism, anyone disagreeing with him was in danger. He hated minorities, the immigrants and the Muslims. His divisive policies based on racism has made the American society polarized and bipartisan. He never admitted his mistakes or corrected himself, and always indulged in self-praise. He ran his foreign policy on tweets which were mostly comical but helped him in remaining in the news.

His fascist policies uprooted the democratic foundations of USA and created upheavals all across the globe. He repaid the Corporates by introducing enormous tax cut which enabled the rich to plunder the national wealth callously and got richer but made the lives of working class pathetic. Mass unemployment and roll back of Obama’s healthcare further compounded the miseries of the downtrodden.

Since Zionist controlled Jewish lobby in USA was instrumental in Trump’s surprise victory, he recompensed the Zionists by cancelling the nuclear deal with Iran, declaring Jerusalem as capital of Israel, sanctifying Golan Heights and West Bank as integral parts of Israel, legalizing Tel Aviv’s forward policy of settlements, making UAE, Bahrain and Sudan establish diplomatic ties with Israel and thus paving the way for one-state solution as wished by Israel. Ultimate aim of Zionist Movement is to establish Greater Israel and next rule the world.

In his exuberance to make America great again, Trump rekindled the embers of racism and came down heavily upon the non-white Americans and the immigrants. His criminal and reckless behavior caused immeasurable and irreparable harm to his country as well as the world.

He was not alone in chipping the democratic foundations of his country. His daughter Ivanka, son-in-law Jared Kushner, sons Eric and Donald Jr, coupled with his hawkish cabinet members and fascist advisers jointly hammered the country.

White Americans who are the main strength of Trump, suffer from superiority complex and look down upon non-white Americans. They are demographically declining for the last 20 years and have reduced from 76% to 67%. Numbers of blacks, Hispanics and immigrants have increased substantially. The Hispanic voters are the single largest community in USA. Their ratio is 12.7%, followed by black Americans at 12.5%. Indians are 4%, (4.2 million) and Asians are 3%.

Earlier this year, large numbers of towns in America witnessed riots triggered because of discrimination against black Americans. Consequent to a white policeman choking to death a black George Floyd in Minnesota, followed by another incident of shooting a black woman dead in her bed further heated up the riots large numbers of States.

The presidential campaign to elect the new president kicked off in mid-2020. To start with there were three major contestants, Trump, Joseph R. Biden and Sanders. The latter dropped out midway. In the run-up to the D-Day on November 3, tensions rose because of Trump adopting a belligerent posture stating that he will not accept the verdict going against him. His armed gangs were equally truculent and threatened to reject the results if their candidate lost the race.

In the wake of vitriolic campaign, and provocative statements hurled by 74 years old Donald Trump who contested for second tenure, and 77 years old former senator and vice president Joe Biden who was taking part in the presidential race for the third time, it was speculated that the election day will be marred by violent disruptions. Most of the gun totting and flag waving gangsters were tribal militiamen who remained on a lookout to strike the supporters of opposite camp. However, contrary to the fears, record breaking 100 million votes were cast which were the highest since 1908 and no incident of violence took place at the polling stations.

In spite of his series of mistakes and criminal charges levied upon him, Trump was confident that his success in 2020 election would be even better than 2016. However, his prediction didn’t come true. Tempers began to rise once vote counting started and the margin of votes bagged by the two competitors began to narrow down bringing it to razor edge. Postal ballot votes which poured in after November 3 and continued till November 6 irked Trump and became a cause of friction. This option had been adopted in the wake of constraints of Covid-19, which had become Trump’s Achilles Heel. Trump had objected to the mail-in voting saying it would have the element of fraud. He wanted all votes received after Nov 3 to be treated as invalid. He requested a recount in Wisconsin.

Trump’s hopes of turning the tide in his favor in the eight swing States dashed because anti-Trump tide could be seen all across USA. Mismanagement of corona virus causing deaths to 230, 000 Americans and resulting in widespread poverty and joblessness unseen in a century enhanced his unpopularity.

Trump’s annoyance surged up once he found himself lagging behind in the race in swing States like Michigan, Pennsylvania, Arizona, Georgia and Wisconsin where he had won last time but this time postal ballot votes made the difference. Arizona with 11 and Georgia with 16 electoral votes have been the traditional bastions of the Republicans, but for the first time the pendulum shifted in favor of the Democrats due to demographic change. Trump started casting doubts on the fairness of polling and demanded stoppage of vote counting, or else threatened legal action. This sort of tension and demand to stop counting was witnessed during the 2000 election. Based on the complaint of George Bush Jr who was losing, the Supreme Court intervened and halted the counting in Florida which threw winning Al Gore out of the race.

Irrespective of his threats, counting didn’t stop. A stage came when his armed supporters chanted slogans of ‘Stop counting’ and tried to barge into some polling stations. The black protestors roared back, ‘Continue counting’. As opposed to teary eyed and emotive Trump crying foul and saying he was cheated, Biden maintained his cool and behaved maturely. Reason behind Trump’s desperation to win at all cost was the lingering criminal cases in dozens registered against him. Already under financial constraints, fighting the costly legal battles and that too out of power could make him bankrupt. That is why he had announced before election that if he loses he will not accept results, will not vacate the White House and will put Biden in jail. In the backdrop of his rapport with the judges of supreme court, he had vowed to challenge the verdict in the apex court and prolong the legal battle as long as possible by seeking counting in each of the swing States, and if that course of

action didn’t work, he would give a call to his armed and charged up white militias to resort to vandalism and create disorder.

Biden continued to make impressive gains even in the swing States and remained well ahead of his rival all along. In Nevada (6 votes), Biden had a tight lead, and in Georgia (16 votes), he was ahead of Trump by 1% votes where more Georgians voted by mail, and in Pennsylvania (20 votes) he led by 2% votes. Till November 6, Trump had secured only 214 electoral votes as against his rival Biden securing 264 votes. With only six votes remaining to reach the magical figure of 270, victory was within grasping reach of Biden.

Late evening on Nov 7, after the announcement of final result of Pennsylvania in which Biden won 20 electoral votes, he clinched the trophy by securing total 284 votes, 14 votes more then what were required. Overall, he captured 74 million votes. He will be sworn in as the 46th president of USA in January 2021. There is no evidence of any legal hitch that will have a bearing on the outcome of election result under the law. However, it is still to be seen whether Trump accepts his defeat and hands over the baton to Biden gracefully.

2020 election was perhaps the most bitterly fought election in recent memory. The bitter divisions and passions sparked by the bruising election campaign are sure to leave the loser dejected and furious. Fears are expressed that a disputed election in the face of extreme polarization might spark unrest. Trumpism has evaporated in thin air but in all probability it will leave behind its footprints which will haunt the Americans for times to come.

Biden has won comprehensively, but he will have a plate full of intricate internal and external problems. He has a huge task to repair the damage incurred and to restore the US image that has been badly tarnished and it is no more a sole super power. He will be taking over the reins of USA in most perilous times when the world has transformed from information into digital age, from uni-polarism to multi-polarity. China, Russia, Japan and Germany have emerged as big powers. The longest war in Afghanistan and war on terror have yet not terminated, and there are several nuclear flashpoints, each having a potential to spark a world war. The two oldest disputes of Palestine and Kashmir remain unresolved; the US-China trade war as well as battle for domination of South China Sea are still simmering, and the US-Iran standoff hasn’t fizzled out.

It is to be seen whether he continues with the traditional offensive foreign policy dictated by Pentagon, or swings towards moderation and amity. Whether he prolongs the war on terror or ends it; whether he will show affections to the grieving Muslim world which has been ruthlessly mauled by his three predecessors or continue with their meddlesome policy, whether he restores the nuclear deal with Iran, harmonize relations with China and Russia, reinstate multilateral agreements, sign climate change accord, improve relations with EU and NATO, bring back American troops from the restive regions and truly work for making the world safe and secure. There will of course be no change in strategic relationship of USA with Israel and India.

At home, the non-white as well as the white Americans are resentful and so are the immigrants, all having their own set of complaints. It is to be seen whether he continues with old partisan and racist policies, or he dispenses justice to all equitably in order to bridge the societal divides; how he deals with all powerful industrial military complex which fancies military adventurism, wars and conflicts. Above all, he will be watched how he tackles the Covid-19 challenge which is so far uncontrollable and how he revamps the country’s declining economy. Good luck to him.