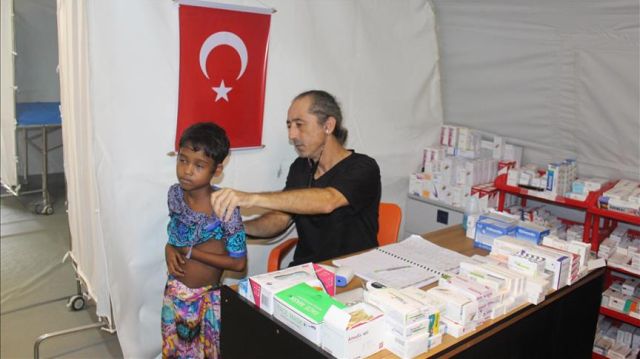 Cox’s Bazar, Bangladesh: A Turkish-funded field hospital at the Rohingya refugee camps in Bangladesh has treated nearly 100,000 refugees over the last seven months, according to hospital officials.

The facility has 50 beds in eight tents and is operated by Turkey’s Disaster and Emergency Management Authority (AFAD) over a half-square-mile (1,000-square-meter) area.

Four general practitioners, seven specialists, and 17 healthcare assistants work at the hospital. Additionally, the hospital has a local team of 25 personnel who provide cleaning, security, and healthcare services.

Turkish authorities had also expanded the hospital by adding an intensive care unit, maternity ward, general surgery section, pediatric and orthopedic departments, and a laboratory, according to hospital officials.

Oguz said more than 90,000 patients have been treated at the site, and more than 500 have undergone surgery.

At least 10 patients were treated after sustaining bullet wounds, he added.

Some of the refugees also have heart-rending stories.

“I want to talk about a patient I can’t forget,” Oguz said.

“One day, a child 15-16 years old came with severe wounds. The child’s story was quite affecting. Myanmar troops opened fire. A bullet entered the boy’s front and out of the nape of his neck. Unfortunately, he got paralyzed. He received serious wounds.

“Although he had got surgery for the wound in other healthcare facilities, he hadn’t fully recovered. Our orthopedic specialist has done his work and the situation is fine now.”

The most common problem for Rohingya refugees are skin infections. But doctors see children suffering from asthma and bronchitis and adults with diabetes and gastrointestinal disease, according to Oguz.

Poor hygiene and a lack of clean water in the camps are the main culprits for many of the ailments, he said.

“I think the primary causes of the health problem of Rohingya are water pollution and their food habits,” Oguz said, adding that the monsoon season is “also bringing the risk of the spread of disease.”

Compounding the state of patients at the site is the way the Rohingya, the most persecuted and displaced people in the world, are denied their right to health care, he added.

A population that has denied access to health care is crowded in a tiny camp with nearly 1 million refugees living on top of each other, so communicable diseases are spreading very easily and very quickly, said Oguz.

He said the hospital has already seen outbreaks of measles, diphtheria, and mumps.

“So these vaccine-preventable diseases are spreading from person to person quite rapidly,” he said, calling for more international help to improve the camps’ “substandard” sanitation.

In the rainy season, there is a lot of acute watery diarrhea, especially in children younger than 5 but also among adults, Oguz said.

Since Aug. 25, 2017, more than 24,000 Rohingya Muslims have been killed by Myanmar’s state forces, according to the Ontario International Development Agency (OIDA).

In its recent report, Forced Migration of Rohingya: The Untold Experience, the OIDA increased the estimated number of murdered Rohingya to 23,962 (±881) from an earlier Doctors Without Borders figure of 9,400.