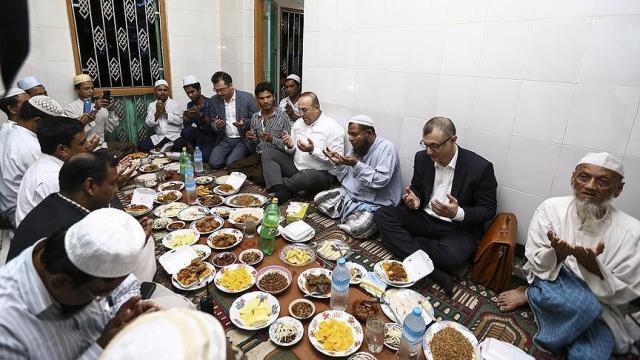 RAKHINE, Myanmar : Turkey’s minister of foreign affairs has been welcomed in Myanmar’s Rakhine State, where he spoke of Turkey’s support for its Muslim population before hosting a dinner to break the day’s fast.

After traveling from capital Nay Pyi Taw to the Rakhine capital of Sittwe, Mevlut Cavusoglu listened to the problems faced by those who lived there, and talked reconciliation late Monday.

Since 2012, Rakhine — home to more than one million Rohingya Muslims (described by the United Nations as the world’s most persecuted minority group) — has been troubled by communal violence, with Rohingya and other ethnicities and religious groups left reliant on aid in internally displaced person camps.

“We will not leave you on your own,” Cavusoglu promised, adding that Turkey — in the form of the Turkish Cooperation and Coordination Agency (TIKA) — would carry out new projects in Sittwe including “schools, clinics, and infrastructure”.

“We will continue to support morally and financially,” he said. “Turkey supports the people here at all times, whether it is humanitarian or protecting rights. They know this, feel this and live this.”

Local residents said that their streets are dependent on the aid provided by Turkey, expressing gratitude toward the state and the Turkish people.

Turkey’s minister of foreign affairs expressed hope that under the governance of Nyi Pu, the state — one of the country’s poorest — would become a prosperous, safe and stable region, whilst also thanking the chief minister for supporting the completion of TIKA-sponsored projects.

“Turkey will continue to support the reconciliation process,” Cavusoglu — who later visited an orphanage and school renovated by TIKA — underlined.

Following his visit, Cavusoglu expressed hope that the new National League for Democracy (NLD) government would show sensitivity toward the Rakhine issue.

Since her party’s victory in the Nov. 8 2015 elections, the country’s state counselor and NLD leader, Aung San Suu Kyi, has been placed under tremendous international pressure to solve problems faced by Rohingya but has had to play a careful balancing act for fear of upsetting the country’s nationalists, many of whom have accused Muslims of trying to eradicate the country’s Buddhist traditions.

Suu Kyi has, however, enforced the notion that the root of many of the impoverished region’s problems are economic, and is encouraging investment in the area, which in turn the NLD hopes will lead to reconciliation between the Buddhist and Muslim communities.

“There have been some steps taken for peace, harmony and stability here,” Cavusoglu said, adding that Turkey was ready to give the region’s people any support needed.

“Turkey has told the people here that it is ready to support them through humanitarian aid and rights advocacy. We have also offered cooperation with local authorities and the state. Issues such as citizenship have already been undertaken,” he said.

“Today we gave the signals for this and have carried out meetings.”

Cavusoglu stated that he would again visit Rakhine.