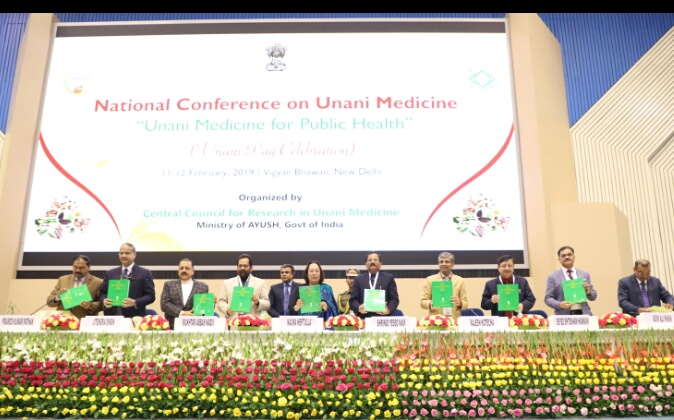 New Delhi: Terming India as world leader in Unani medicine,  Manipur  Governor and former Union Minister Dr. Najma Heptulla on Monday underlined that  “Unani Medicine is capable of offering  right solutions  for many  present day  health challenges and problems arise out of  lack of treatment and resources. Hailing the effectiveness of Unani medicine,  Minister of State  AYUSH, Shripad Yesso Naik said the minister has taken many a steps to promote Unani Medicine in the country as well as abroad.

Inaugurating  the two-day National Conference on Unani Medicine organized by the Central Council for Research in Unani Medicine (CCRUM) as a part of 3rd Unani Day celebration here at Vigyan  Bhavan , Dr. Heptulla enumerated many virtues of Unani system. In her address, she   attributed the success of Unani to its accessibility, affordability and holistic approach towards healthy living. She  also urged the Unani fraternity to progress and evolve with the changing times, adapt to new techniques of health research and contribute new approaches to health management. She said Manipur has the treasure trove of as many as  500 medicinal plants and invited the medical scientists to visit the state for research. Paying  rich tributes to great freedom fighter and savouir of Indian traditional medicines in the face of British onslaught   Hakim Ajmal Khan, whose birth anniversary is now observed  as Unani Day on 11th February every year, she  said he was humane,  a versatile genius, articulate and a remarkable combination of honesty, high idealism and professional skill.

Highlighting the strengths of Unani Medicine and other AYUSH systems, Union Minister for Minority Affairs  Mukhtar Abbas Naqvi said that the AYUSH systems are golden key to health and wellbeing and India is the strongest hub of Traditional Medicine which is one of the reasons medical tourism is flourishing in the country. He stressed on Integration of Unani Medicine in Mainstream Healthcare in line with the government policies and initiatives for mainstreaming of AYUSH in national healthcare system.

Speaking on the occasion, Dr. Jitendra Singh, Minister of State (IC), Ministry of Development of North Eastern Region, elaborated the present day threats to public health and how capable Unani Medicine has been in aptly maintaining public health. He also expressed his hope that Unani Medicine and other AYUSH systems will come forth to combat the current public health issues. Dr. Singh termed Unani Medicine as an asset to the healthcare delivery system and our traditional knowledge. He stressed the need for a holistic and synergetic pattern of treatment  in which no system overwrite the other.

The conference theme is ‘Unani Medicine for Public Health’.  AYUSH minister  Naik said his ministry has taken measures to promote Unani Medicine in national public healthcare system through regulation of research and integration of quality products, practices, and practitioners into the health system. ‘Our efforts are focused to tap the real potential of AYUSH systems in imparting preventive, promotive and holistic healthcare to the people’, he added.

Vaidya Rajesh Kotecha, Secretary, AYUSH,  urged to adapt Information Technology and informed about the steps taken by the Ministry of AYUSH in the form of National AYUSH Morbidity and Standardized Terminologies Electronic Portal (NAMASTE – PORTAL), initiative for incorporation of AYUSH Morbidity Codes in WHO – ICD 11, AYUSH Grid, use of Social Media and A-HMIS.  He made announcement for allotment of land and allocation of Rs. 250 crore for National Institute of Unani Medicine to be setup in Ghaziabad. He applauded the research endeavors of the CCRUM and its crucial contribution to public health and Unani Medicine.

The dignitaries released the Conference Souvenir and four other publications brought out by the CCRUM. Unani Pharmacopoeia of India (UPI) Part-II, Vol-IV is the official document for standards of 50 Unani formulations. The work was carried out by the CCRUM under supervision of Unani Pharmacopoeia Committee and Pharmacopoeia Commission for Indian Medicine & Homoeopathy (PCIM&H), where as ‘Clinical Validation of Unani Formulations in Waja‘ al-Mafāṣil (Rheumatoid Arthritis)’ is the outcome of validation studies on five Unani formulations safe and effective in Waja‘al-Mafāsil. The fourth publication is Urdu translation of ‘Manāfiʻ al Aghdhiya11h wa-Daf’u Maḍārrihā’, an original Arabic work on diet and dietetics Muhammad ibn Zakariyya Rāzī (d. 926 AD). The fifth released book is Urdu translation of Persian book, ‘Intekhab-i Jalil’ which comprises 800 prescriptions effective in diseases of different body systems authored by Jalil Ahmed Ansari, a legendary Hakim of twentieth century.

With the presence of experts, luminaries, scholars of Unani Medicine, the conference aims to provide a platform for healthy discussion and brain storming of ideas and creation of better avenues in further utilizing the strength of Unani Medicine in public health issues. About 1300 delegates, resource persons, academicians, researchers and industry representatives are participating in the conference.