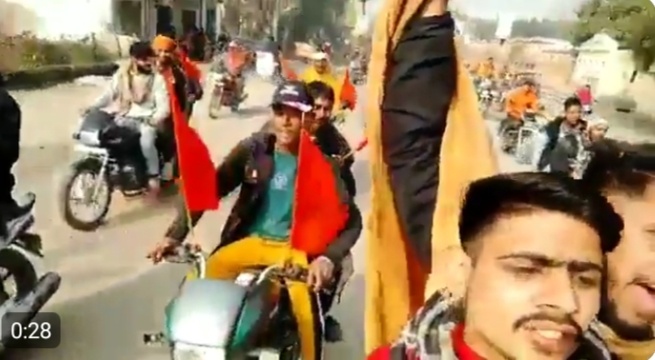 New Delhi: Two Hindu extremists were arrested on Thursday after they abused Muslims and asked them to go to Pakistan. The duo made ”objectionable’ remarks during a rally taken out in Shikarpur town of Uttar Pradesh’s Bulandshahar district.

They were arrested after a video clip went viral on social media, in which the two men were seen chanting anti-Muslim slogans.

Bulandshahr Police confirmed the arrest. They said that the video clip was recorded and posted on social media by the accused.

The anti-Muslim remarks by the accused drew widespread criticism on social media. Some users also questioned the very purpose of such rallies being taken in the name of fund collection for Ram Mandir.

Who would give these terrorists donation for Ram Mandir in Muslim dominated areas? This fund collection drive is to provoke Muslims & create "opportunities" to attack Muslims with the help of cops & civic authorities. https://t.co/R5S6eFIGTw

Several incidents of violence have been witnessed during such rallies taken out in Madhya Pradesh. A saffron flag was planted atop a mosque by participants of a rally in Mandsaur in the states in December 2020.