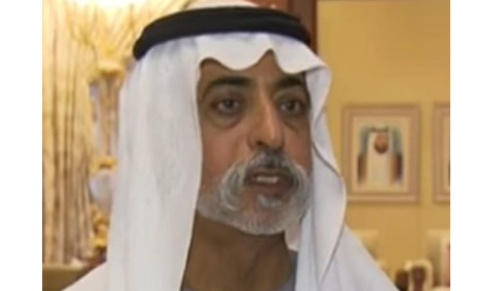 The Sunday Times said that Caitlin McNamara, 32, was allegedly assaulted on 14 February – Valentine’s Day – this year at a remote private island villa where she thought she had been summoned to discuss preparations for the inaugural Hay Festival Abu Dhabi.

McNamara spent around six months working in Sheikh Nahyan’s ministry after she was hired by the prestigious literary festival to organise their first UAE event.

“After six months there I was used to being summoned to meetings at all times of day,” she told the Sunday Times. “And no one said no to Nahyan — he was like a god.”

McNamara told the Sunday Times: ‘It was creepy. He was on the sofa next to me and began touching my arm and feet and I was pulling away, then he got forceful… Suddenly, it clicked why I was there. I felt so naive.’

She added: ‘I was alone on this island in a concrete building with this powerful man in a country where every day you heard stories about people disappeared in the desert.’ McNamara claimed Sheikh Nahyan had also ‘pushed me against the wall and began rubbing my breasts’ and ‘pushed me backwards onto a circular bed covered in fur’.

McNamara said he had pulled up his throbe and was naked underneath and then tried to climb on top of her.

McNamara was so scared, the Sunday Times reported, that she cannot explain how she got away. “I just remember he kept grinding and dry-humping my leg even as I was escaping,” she said.

Nahyan, who reportedly likes to be known as the “Sheikh of Hearts”, has issued a statement through his lawyers saying he is “surprised and saddened’ by McNamara’s accusations.

Reacting to McNamara’s allegations, Hay festival has said it will not return to UAE until Sheikh Nahyan is removed from his post.

Women’s rights campaigner Baroness Helena Kennedy QC has made a deal with law firm Carter Ruck to represent McNamara free of charge and it will determine if it can prosecute the sheikh in the UK.

Priest arrested for his attempt to sexually assault American woman