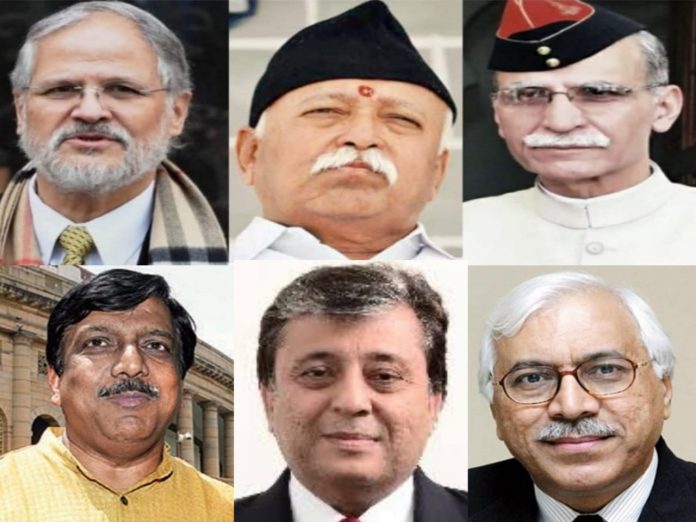 According to the Muslim intellectuals the meeting held in “a very cordial” atmosphere continued for 75 minutes whereas time allotted was 30 minutes! In a post-meeting justification of the parleys Quraishi stated (The Indian Express, September 26) that their main concern was “the insecurity being increasingly felt by the Muslim community in the wake of recurring incidents of lynching of innocents, calls by Hindutva hotheads for genocide and the marginalisation of the community in almost every sphere”.

This delegation consisting high-ranking former Indian government administrators, a top-most military commander and two members of Parliament was expected to be familiar with the protocols of a democratic constitutional polity that the above mentioned issues fall in the realm of governance. They should have met Indian PM or Home Minister to demand corrective measures. If not satisfied they should have approached the President of India. However, they decided to approach RSS top brass which has no legal sanctity.

They may rightly argue that since RSS controls BJP [RSS does not hide the fact that BJP is its political appendage (RSS Hindi publication Parm Vaibhav ke Path Per, 1997) and BJP rulers from PM to most of his cabinet members, BJP CMs and Governors of States publically declare to be RSS members) why not approach the source of Power itself! This meeting with an extra-constitutional authority is tantamount to justify the extra-constitutional role played by Sanjay Gandhi during the Emergency. Did these Muslim intellectuals believe that they were living in the Emergency times?

This model opted by Muslim intellectuals presents a horrendous option for other minorities in India. By this logic Hindus, Sikhs and anti-Islamist Muslims being targetted by Islam-o-fascists in Jammu Kashmir should approach organizations like Hizbul Mujahideen, and Jaish-e-Mohammed for securing safety of life and property!

Another troubling issue is how these Muslim intellectuals came to the conclusion that RSS represents all Hindus of India. Have they lost faith in common Hindus of India who do not support RSS and remain faithful to the democratic-secular polity of India?

Muslim intellectuals wishing to open Hot Line with the de facto ruler of India, RSS should have done home work on cow-slaughter before the meeting. It was the most important ideologue of RSS, MS Golwalkar claimed in 1966 (RSS publication ‘Spotlight’) that cow-slaughter began with the arrival of Muslims who wanted to “stamp out every vestige of self-respect in Hindus”. It is not corroborated even by Swami Vivekananda who stated (February 2, 1900): “You will be astonished if I tell you that, according to old ceremonials, he is not a good Hindu who does not eat beef.” The beef-slaughter as a Muslim crime is the creation of RSS hate propaganda. Large number of Dalits and Christians too consume beef. The Muslim intellectuals should have informed Mohan Bhagwat that RSS-BJP run governments in Goa, Karnataka and all North-eastern States allow cow-slaughter. Then why punish Muslims and Dalits only?

RSS organizations have been in the forefront of spreading the bogey that Muslims in few decades would outnumber Hindus in India. The Muslim intellectuals should have shared with Mohan Bhagwat that despite 1000 years of Muslim rule (as claimed by RSS) the first census in India held in 1871-72 recorded: “140½ millions of Hindus and Sikhs, or 73½ per cent., 40¾ millions of Muslims, or 21½ per cent.” Now Muslims constitute only 14% of the population. He also should have been told that in USA, Australia, Canada, New Zealand and UK population of Hindus has increased by almost 100% in last one decade or so. Should it be a matter of alarm for Christians of these countries? Only Racists bother about increase/decrease in population of any section in their respective countries.

Muslim intellectuals looking for salvation at the altar of RSS must not forget that Muslims/Islam or other minorities in India can survive only when Indian democratic-secular-egalitarian polity framed under the guidance of Dr. BR Ambedkar survives. It may have many infirmities but is the only guarantee against majoritarianism or Hindutva bigotry.

In this regard RSS is not only antithetical to Muslims but Indian democratic-secular Constitution. The Indian Constituent Assembly approved the Constitution on November 26, 1949. RSS instantly rejected it through an editorial in its English organ Organiser (November 29) demanding promulgation of Manusmriti. Earlier RSS icon VD Savarkar had declared it as the most worshippable scripture after Vedas. It is to be noted that Manusmriti decrees sub-human status for Hindu women and Sudras. It was burnt on December 25, 1927 in the presence of Dr. Ambedkar during Mahad agitation who also called upon to commemorate every 25th December as ‘Manusmriti Dahan Divas’.

RSS hated every symbol of democratic-secular Indian polity. On the eve of Independence Organiser (August 14, 1947) denigrated the National Flag by declaring that it will “never be respected and owned by Hindus. The word three is in itself an evil, and a flag having three colours…is injurious to a country.” In the same issue, in an editorial (‘Whither’) RSS rejected the whole concept of secular state by arguing: “in Hindusthan only the Hindus form the nation and the national structure must be built on that safe and sound foundation…the nation itself must be built up of Hindus, on Hindu traditions, culture, ideas and aspirations.”

Quraishi gleefully informs us that Mohan Bhagwat emphasised on 3 things: “Hindutva is an inclusive concept in which all communities have equal room…the Indian Constitution is sacrosanct, and the entire country has to abide by it. He sought to dispel the fear that RSS is seeking to abandon the Constitution at the first opportunity. And, that Muslims will be disenfranchised.” If Muslim intellectuals were familiar with Savarkar’s Hindutva (1923) and Golwalkar’s We or Our Nationhood Defined (1939) and Bunch of Thoughts [1966] these claims would not have gone unchallenged. The first two Holy Books for RSS demand cleansing of Muslims (and Christians) from as Jews cleansed by Hitler in Germany. The last one has a chapter (XVI) titled ‘Internal Threats’ which declares Muslims and Christians as enemy number one and two and describes Indian Constitution as worthless and anti-Hindu. Mohan Bhagwat has never disowned these works.

It is sad that a group of Muslim intellectuals on behalf of “the middle class and educated Muslim” as confessed by Shahid Siddiqui is legitimizing an organization which is waiting for an opportune time to finally demolish the largest democracy in the world. They did not bother to confront RSS chief with the facts of pauperization of common Indians, mounting unemployment, hunger and violence against women. These issues should have been the main concern as Muslims standing at the lowest pedestal socially, financially and politically are naturally the worst sufferers. Sadly they did not touch the wide use of terror laws by the government run by the RSS cadres under which large number of Muslim activists and non-Muslim activists are being kept perpetually in detention. These are critical times for the Indian democracy; if it is demolished there is no possibility of surviving of minorities including Muslims. India needs intellectuals who stand in defence of the Indian democracy and not restrict themselves to demand security for a miniscule section of one particular community from an extra-constitutional power centre.

(An edited version appeared in the Indian Express, Delhi, on September 27.)