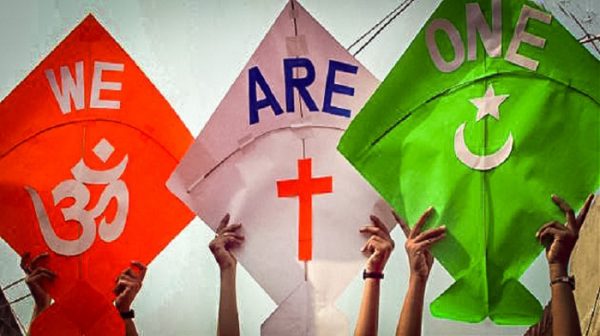 Fascism is well expounded as an invasion over cultural diversity. It suppresses its logic on people disregarding the tradition and livelihood of people. It can be exemplified as a factious mind deciding what you would eat how you should live. Hitlers Nazism and fascism in India are resembles in demonstrating a unified ideology over diversity. Babri Masjid incident implicitly elucidates hidden agenda of Sangh Parivar in building an arbitrary unite Hindu code applauding Rama as great. The most recent manifestation to provoke glory of Rama through Onam, a Kerala based festival can contextually read from this unification process. Moreover the mystery behind the ban on cow slaughtering, most debated topic that incited domination of Brahmins and cultural devastation over Dalits also pursues the same fascist mode of unification. In real, the Hindu mode of Fascism itself hates the dominant theme of diversity in Hindu tradition.

When constitution affords personal laws, fundamentally relied on religious texts it is outspokenly respecting the religious values and norms. Our constitution does not confess the laws of any particular religion as national, but it professes right to profess any religion. Indeed, the personal laws granted by constitution respects diversity. The hindutwa forces, who have great hatred towards diversity, thus endorse Universal civil code. A critical note on Universal civil code from such a theoretical context will exemplify Universal Civil Code as a mere political event not national. By the submission of BJP-led Central government’s affidavit in Supreme Court a few days ago, the debate on Muslim personal law has intensified in India.

The current negotiations over Universal civil code are extremely targeting Muslims. Even many people conceded that Muslims are enjoying special privileges from the constitution. Our constitution has afforded upmost facilities in terms of unification. The laws resulting ‘rule of law’ like Criminal codes, Indian Penal codes, civil procedure codes and Criminal procedure codes symbolize the intension of country in unity amidst diversity. The Islamic Shareeath act of 1937 concentrates in areas like marriage, post-marriage life, inheritance, adoption of son, Vaqf et cetera. If a believer denies, he has no obstacles under Special Marriage Act of Indian constitution.

The prominent argument of Uniform civil code supporters is bounded in inclusion of Uniform civil code in Directive Principles of State Policy (DPSP), well defined in section IV of Indian constitution. As per article 44 ‘The state shall endeavor to secure for the citizens a Uniform civil code throughout the territory of India’. DPSP can be defined as bundles of goals needed to be accomplished by a government in its reign of power. Moreover, DPSP cannot be implemented by any court in India. Dr BR Ambedkar referred to them as policies and principles to be achieved in an economic democracy, which is an ever changing concept and is totally dependent on the times and circumstances, how it is achieved, and it would be wrong to lay down a fixed concept of it. Further, the State would have to answer to the people, and thus these Directive Principles would not be mere pious declarations.

Anyway, fundamental rights have dominance over DPSP. It provide freedom to manage religious affairs subject to public order, morality and health, every religious denomination or any section thereof shall have the right ( Article 26). This vividly expounds the respect of constitution towards multiculturalism and religious pluralism.

The Questionnaire is targeting the vulnerable section inside the religion, namely fundamentalists. Islamic laws cannot be logically proved. Quran says ‘It is not for a believing man or a believing woman, when Allah and his Messenger have decided a matter, that they should [thereafter] have any choice about their affair. And whoever disobeys Allah and his Messenger has certainly strayed into clear error (33/36). Here yes or no type questions traps the reader as both answer supports Universal civil code. Thus Muslim scholars unanimously ignored the questionnaire.

The only paragon of a uniform code in India is the Portuguese Civil Procedure Code (1939) of Goa, which is neither ‘uniform’ nor gender-just. In this law, customs of the Hindus of Goa are highly concerned including “limited” polygamy for Hindus.

Communalists, socialists and so called secularists from congress confess to pursue uniform civil code in promoting secularism in nation. The communist interpretation explicates belief as personal and laws as general. They are implicitly trying to adopt a western mode of secularism like what we saw in Turkey during the reign of Ata Turkism. But such a mode is vividly impracticable in a county like India where religious pluralism plays an inevitable role in nation building.

Shah banu case was one of the laureate incidents in the social, political and secular sphere of the country. In 1978, Shah banu was brutally divorced by the barrister Muhammed Ahmed Khan passing 40 years of happy marriage life. Seeking livelihood needs, she went magistrate arguing justice professed by the constitution. Court provided 25 rupees per month which further added fuel to the fire as it seem as an irritation to all widows. By CRPC (The code of criminal procedure), she got an assistance of 179 rupees per month from the High court. Ahmed khan appealed Supreme Court against the high court verdict. He tried to assert that Islamic jurisprudence does not compel him to pay more than the time period of Idhha (a particular period after the divorce). The bench supervised the case not only dismantled the appeal but also proclaimed that the divorced women has the right to be paid unto another marriage. By misinterpreting the Quran verse, the court expounded that there is no difference amidst the Quran verse and the code of criminal procedure.

The verdict emasculated the patience of Muslims as it dismantled the Shareeath of Islam in need of political notions. All India Muslim personal law board and Majlis e Mushavara led the Shareeath Campaign. Even though the campaign flourished with wide support, it was not enough to overcome the dominance explored by the national media and secular brainstorming thoughts. It was the first time the nation witnessed a conflict between Hindu-Muslim ideologies after the Independence. During this epoch, communal troops like RSS burgeoned in the county as bedrock of political thoughts. The Prime Minister realized the mystery behind the campaign which was highly rooted in the country. ‘The Muslim women (protection of rights on divorce act, 1986)’ was a spoofed outcome of this realization. Unfortunately, Rajiv Gandhi was roughly alleged as a conspirator of Islamic fundamentalists. The statement of advocate Kaleeshwaram Raj has a remarkable position in justifying the things in the right manner. He said “the law provided for the Muslim Women by the Rajiv Gandhi government was extremely alleged in 1986. It was vividly elucidated as a counter attack to the popular verdict of Sha’abanu case. The high court afforded 179 rupees per month. But in real, the 1986 act gave her the right to buy lifelong wealth from her husband in terms of Matha’a (money which the husband wants to give to his wife after divorce for her future life). The allegations are unambiguously false and mere. Now the matter has again exposed in terms of Universal Civil code.

Feminists and human rights organizations prop ups Universal civil code as a strong move against patriarchal society. Eternal equality is a Utopian concept and it is somewhat impossible. Despite the allegations, Islamic law promotes a scientific mode of discrimination. Even though the government’s affidavit did not specifically request the court to ban instant talaq or polygamy, it nevertheless tells the Supreme Court that the issue of validity of triple talaq, nikah halala and polygamy should be considered in the light of principles of gender justice.

Politicization of the personal laws in the Muslim case is an indirect outcome of self-seeking Maulvis. The gravest danger in Muslims is that they are reading erroneous interpretation made by the so called Maulvis. For instance, the concept of Halalah, mentioned once in Qur’an (2: 230), is one of the most misconstrued texts in the prominent Islamic scripture. In real, this was has elucidated a logical procedure of divorce (talaq) pursuing a gradual approach in it. Halala implies that it should be lawful for the first husband to remarry his divorced wife under the condition that she wants to be married to another person and gets divorced through the same logical process. But it is so grief and sad to interpret that the former husband knowingly manages the Halala marriage. This expounds women as a sex object which was vividly against the Quranic notions.

The whole misconstrued concepts are the outcome of erroneous interpretation. What is uniformity? Does it mean the integrity of a nation where uniformity in laws is crucial? If yes, who exactly is the beneficiary? Which class of people benefit from this integrity? Do the uniform laws mean justice for women in marriage and inheritance? Which religions personal laws will be considered as a source for universal civil code? Why Muslim personal laws are only targeted? The answer of all these questions will collectively proclaim Universal Civil Code as a political outcome molded by fascist brains.