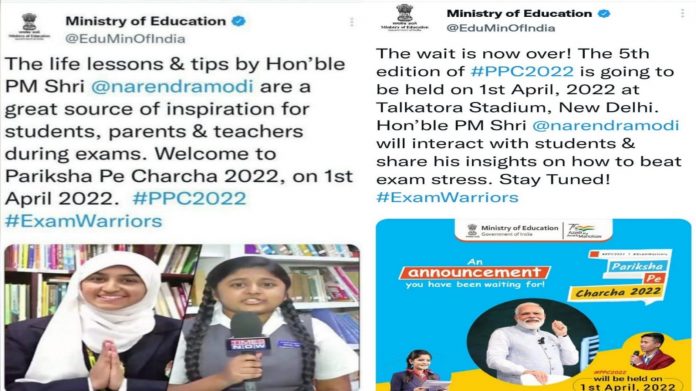 New Delhi: The latest manifestation of how communalism is infecting the polity from the top is the removal of a tweet from the Federal Education Ministry. The tweet was regarding this year, Pariksha Pe Charcha (PPC) in which a picture of Muslim girl with a hijab was posted. The fifth talk with the Prime Minister Narendra   Modi with students is scheduled to take place on April 1st at the Talkatora Stadium in the national capital.

The federal ministry initially tweeted about the event with a picture of a Hijab-wearing girl, but quickly realised its “folly” and deleted the tweet from its Twitter account, replacing it with a fresh image.

However, Ravi Nair, a Twitterati, managed to catch the image of the Ministry’s tweet before it was taken down. On his Twitter account, he shared the image. He asked whether it was removed because the picture of a Muslim girl with a hijab.

He tweeted “Why did the Union Ministry of Education delete this tweet? Is it because they posted the picture of a Muslim girl with a hijab?”

The ministry has tweeted with new picture.

This year, the Prime Minister will meet with students to discuss how to be calm and comfortable during the impending exam season.

Even PM Modi took to Twitter saying the student’s excitement for this year’s Pariksha Pe Charcha has been incredible.

“The enthusiasm towards this year’s Pariksha Pe Charcha has been phenomenal. Lakhs of people have shared their valuable insights and experiences. I thank all those students, parents and teachers who have contributed,” he tweeted. “Looking forward to the programme on 1st April.”