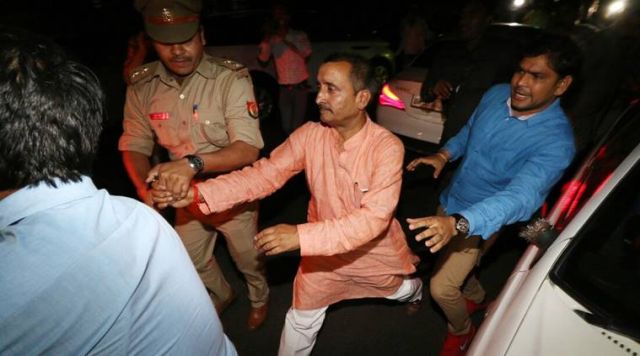 Lucknow : The Central Bureau of Investigation (CBI) on Friday detained BJP legislator Kuldeep Singh Sengar who has been accused with the alleged gang rape of a 17-year-old girl in Uttar Pradesh, official said.

Sengar, an MLA from Bangarmau seat in Unnao district, is being questioned at the CBI headquarters here.

The probe agency filed has three FIRs in the rape case and the death of victim’s father in police custody. The FIRs were filed on Thursday night following the Centre’s order.

Sengar was asked to join the investigation when he was about to leave for Varanasi. He was brought here earlier on Friday.

The victim tried to set herself ablaze outside Chief Minister Yogi Adityanath’s residence on Sunday, claiming inaction in the gang rape case.

Later on Sunday, her father was picked up by the police and allegedly roughed up by Senger’s brother Atul Singh and his aides following which he died.

The incident has triggered a political storm and public outrage.