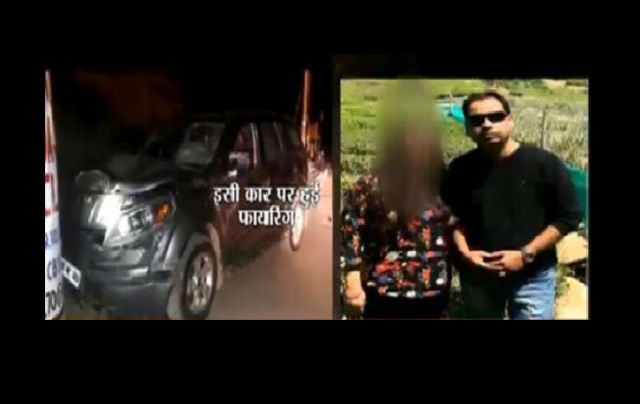 Lucknow : An Uttar Pradesh constable was on Saturday arrested and booked for murder after he shot and killed a young Apple executive from close range, an official said. The state government has also ordered a probe into the incident.

The constable and his colleague have been dismissed from service and sent to jail, the police said. Chief Minister Yogi Adityanath said if needed a CBI inquiry would be ordered.

According to a colleague of Apple sales manager, the constable, Prashant Chowdhary, had shot at Vivek Tiwari after chasing the SUV he was driving. He had apparently failed to stop Tiwari during a late night checking.

The incident happened at around 1.30 am, when Tiwari was heading home after the launch of iPhone XS and XS Max along with Sana Khan, his colleague.

Khan said that after they were fired at, Tiwari got scared and drove the SUV into an underpass pillar, further sustaining injuries.

The Director-General of Police, O.P. Singh, has constituted a Special Investigation Team (SIT) headed by Inspector General (Lucknow) to probe the case. Superintendent of Police (SP) crime and rural will be part of the team which has been asked to submit its report at the earliest.

The autopsy revealed on Saturday that the bullet had hit Tiwari in the chin and got stuck between the neck and the head, leading to his death due to “profuse bleeding”.

The SSP of Police, Lucknow, Kalanidhi Naithani, said the constable had been booked for murder after Khan filed an FIR.

According to the police, when the constable at Gomtinagar extension signalled Tiwari to stop for checking, “he tried to flee”. Police officials said “Tiwari sped away and his car hit a bike on which two constables were riding, who then chased and shot him”.

A police officer, not wanting to be named, said that “the constable fired in self-defence.” The Additional Director General of Police (Law and Order), Anand Kumar, however, conceded that “law has been violated in the incident”.

He also punctured the self-defence theory floated by his own men and said that had this been the case, the policeman could have fired at the tyre of the SUV rather than directly shoot at the man.

Kumar added that this was a “shameful incident for the police force”. Police had initially claimed that the bike was hit by the deceased and the constables were injured.

However no injuries were found on the policemen involved nor was their official vehicle damaged.

A second policeman has also been arrested and were sent for medical examination to ascertain if they were drunk when the incident took place, an official said.

Tiwari’s widow, Kalpana, has accused the police of being “trigger-happy”. She told reporters that the police had only informed her of “an accident” and that her husband had been taken to the Lohia hospital.

When she reached there, along with her two daughters, they were told that Tiwari “had died due to excessive bleeding”, she told the media, adding the bullet angle was not even revealed to the family.

The couple had spoken on the phone minutes before the accident.

The widow has demanded that Chief Minister Yogi Adityanath should explain to her and her girls why the 38-year-old Apple sales executive was dead.

“We were so happy when the Bharatiya Janata Party government was voted to power…when Yogiji became Chief Minister…was it for all this?” she asked.

Adityanath told the media that a probe had been ordered and it was “definitely not a police encounter”. He said “if needed, we will not hesitate in ordering a Central Bureau of Investigation probe into the incident.”