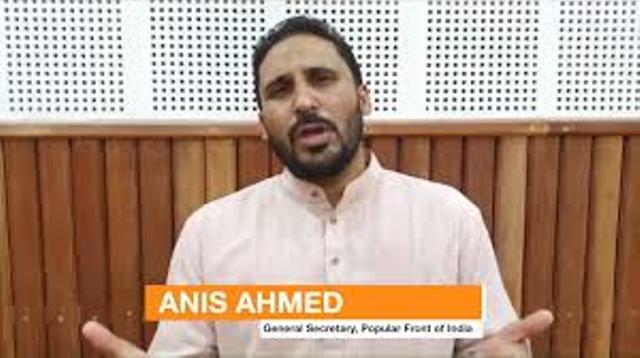 New Delhi: Popular Front of India, which on the radar of the Yogi government, reacted sharply to the arrest of journalist Kappan and three others. It said the baseless allegations of UP government are sensational news devoid of any facts.

In a statement, PFI General Secretary, Anis Ahmed said the new rounds of allegation against Popular Front are nothing but an attempt by the  UP government to divert the attention away from its failure to handle the Hathras rape case.

“UP under Yogi has become a jungle raj where law and order is completely collapsed. Earlier it was the minorities who felt unsafe in UP but now the Dalits and women are also unsafe in the state.”

Hefurther underlined that, “The attempt to link Popular Front by alleging a conspiracy to incite caste or communal violence is completely baseless and ridiculous. Sensational news was created by arresting 4 people who were on the way to meet the victim’s family. Of the 4 arrested, 2 were leaders of a student’s organization CFI and another person Siddik Kappan is a journalist and secretary of the Kerala Union of Working Journalist. The journalist body has also condemned his illegal arrest and moved to the Supreme Court against the illegal arrest.”

These arrests prove that in UP even intending to meet the family of the victims is a crime. After the arrests new stories are being ranging from foreign funding of crores of rupees and an international conspiracy to defame the Yogi government, he added.

He recalled that during the anti-CAA protest the same UP police had alleged that Popular Front’s UP state ad hoc committee members were e the mastermind of the violence but failed miserably in the court and everyone were released on bail.

“Even the allegation of Popular Front involvement in the Delhi riots turned out to be an embarrassment for the Delhi Police when the 2 state leaders arrested by the Delhi police of fake charges were released by the court within 1 day.”

Anis Ahmed alleged that, “The current round of allegations is a product of machinery led by the central government to save the face of the UP government. As the previous outcome we are sure that these new ridiculous and imaginary allegations will also fall on its face when the police will be asked to provide evidence.’

He also slammed a section of media for defaming the organization.

Time and again the agencies controlled by the BJP government have tried to defame Popular Front but everything turned out to be just diversion tactics, he added.