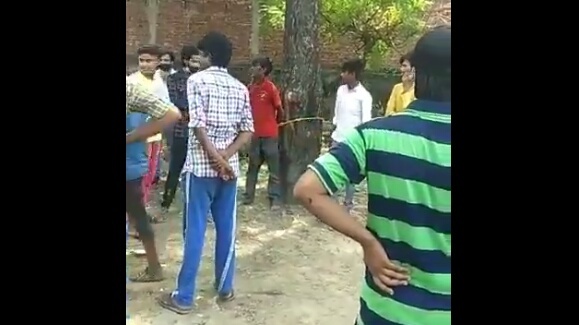 In a guresome incident of lynching a Muslim youth was killed by a frenzy mob in Aonla village in Uttar Pradesh’s Bareilly district.

On suspicion of theft a Hindu mob tied  Basith Khan, a 32-year-old Muslim to a tree  and rained punches and kicks on him for hours before he collapsed.

The incident took place on Thursday night and Basith breathed his last on Friday evening in a hospital in Bareilly.

Soon after the brutal attack, Basith was handed over to police and instead of taking him to a hospital police dropped him home in a rickshaw and left.

Muhammed Asif Khan, a Muslim activist has shared a video on Twitter in which Basith is seen tied to a tree and people were thrashing him.