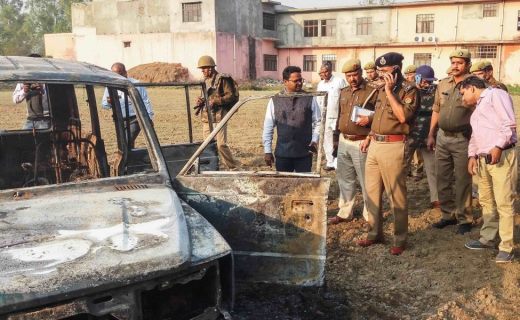 Uttar Pradesh Police inspector Subodh Kumar Singh was killed by a mob in Bulandshahar. The cowardly killings and its videos were viral from yesterday evening. The mob, it is alleged, was protesting against cow slaughter, that was ‘said to have’ happened in the area. Such hearsay have become part of the mob culture and justification of the goons masquerading as leaders and planning to contest next elections.

We know very well that general elections are due. The state government has not done anything for the people. Rather, the chief minister and his poisonous speeches are ‘toast’ of the Sanghis who think him as future prime minister. Bulandshahar recently saw a huge gathering of the Muslims for what they call ‘Ijtima’ which is purely a religious gathering but rumours about it had spread everywhere in the region. I was told by a cab driver in Delhi that one crore Muslims have decended in Bulandshahar. I was also not sure for what but later he informed me that there is a religious festival.

It is not possible that a Muslim festival pass off peacefully hence the ‘experts’ ensure something happen so that the blame can easily pass on to Muslims. Bulandshahar is about 40-45 kilometer from the place where the incident of killing of the Police officer has happened and Uttar Pradesh police as well as Bulandshahar police has categorically stated that this incident has nothing to do with Tablighi Ijtima.

The corrupt, criminal and dishonest TV anchors are on work again connecting the Bulandshahr riots to beef eating and Ijtima. The Uttar Pradesh police must investigate into this affair and expose the political links behind the killing of the officer Subodh Kumar Singh. The goons take benefit of such a situation and his cowardly killing must wake up the police to be absolutely secular and dedicated to the constitution. It is time, the UP police assert against the political pressure and work as per the rule of law. It is enough now. So many cases of innocents being killed, encounters happening yet it is the goons and their allegiance to the poison being spread in the name of religion who have gone berserk.

Uttar Pradesh chief minister Yogi Adityanath is busy spreading venom everywhere. His hatred and poison is showing results with the crowd taking law into their hand. There is clear indication that BJP leaders have decided to spread as much hatred as possible because governance is not their cup of tea. How can a party in power allow its leader to be unaccountable to the issue of governance.

It is sad, disturbing and equally serious that people will be slaughtered for a party to come to power. With active support from the ‘fourth pillar’ of democracy, which has crossed all limits of decency long back and now become a blackmailer and an active participant in spreading distorted information, Hindutva propaganda, anti Muslim rhetoric, anti Dalit campaign. The society was never divided as much as it is today. We never saw such reckless leaders since independence who damn care about killings of innocents.

This country is still looking for justification of criminals in the name of beef, cow slaughter and many more things. Their cow business has killed farmers. These thuggish brahmanical crooked campaigners should ask the farmers as what happened to their cows and why are cows dying unnatural deaths in our villages when they have no meadows and charagahs, no fodder to eat. Who is killing cows? It is not the Muslims but the policies of the government which are responsible for killings and suicides of farmers. Cow is part of our agrarian system and not protected by those who want to mint money and political benefit out of it.

Since the Indian state and the political leaders continue to abdicate their responsibility and dividing people and polarised the administration everywhere, it is time for us to protect our country, our constitution. We need to be extra vigilant and expose these TV channels, dalals in the media, the corrupt politicians. No criminal activity should be defended. No justification should be allowed. We also request bureacracy to stand up and do not cow down to political pressures. It is also the time for the Supreme Court to issue clear guidelines to police and administration so that we can have a peaceful general elections. We can not allow India to burn just for the sake of a few who want to be in power at the cost of the country. Every citizen of India has a duty to stand united and judge things on the basis of constitutionality, and not on the basis of the rumours being spread by the ‘faithful’ trolls.

Ironically, inspector Subodh Kumar Singh was killed by the anti cow slaughter group. It is the responsibility of the society to expose who are the leaders of this group and their allegiance to power. The inspector also investigated the murder of Mohammad Akhlaq who was killed on the charges of eating beef a few years ago. So, this corrupt, criminal mob does everything on the basis of rumours and politicians will debate on these rumours rather than asking the criminals to be arrested and investigated.

For all those journalist friends who are following this story, my request is to follow this case independently and expose those ‘mob leaders’ who killed it. Let us see how this investigation goes. You can not allow the officers on duty to be killed like this. It is a wake up call.

The author  is a social and human rights activist. He blogs at www.manukhsi.blogspot.com