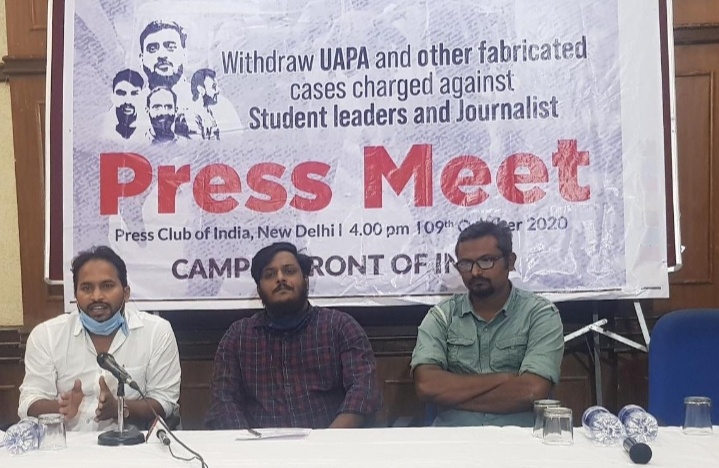 New Delhi: Defending its arrested members and journalist, Campus Front of India  on Friday alleged that U.P police is “terrorizing” students and journalist in order to evade public repulsion against Yogi Government because of its mishandling of the Hathras gang rape and murder incident.  Terming the Police action as an extreme case of abuse of power,   student leaders said the police allegations of ‘sectarian violence’, ‘fundraising’ and ‘carrying dangerous literature’ is baseless and nonsensical.  They demanded that the U.P government must withdraw draconian laws and release the students immediately.

Addressing a press conference at the Press Club of India,   Campus Front of India (CFI) functionaries, Sabi Ahmad (Delhi state president), Rauf Shareef (National Gen. secretary) and P. Abdul Nazir (National   Committee member) said CFI members Atiqur Rahman, Masud Khan and journalist Sidheeq Kappan were going to visit the family of the Dalit girl Manisha on 5th Oct along with the driver, Alam.  They claimed that the police arrested them illegally in the absence of any crime and arbitrarily imposed UAPA and sedition charges against them, which is an extreme case of abuse of power. We urge the U.P government to withdraw draconian laws and the release of four innocent persons immediately.

On the conspiracy theory, Rauf Shareef said the police came up with a series of lies and unfounded allegations against them in contrast to other visitors.

“The police’s lies on ‘sectarian violence’, ‘fundraising’ and ‘carrying dangerous literature’ are baseless and nonsensical.”

He underlined that it is an undisputed fact that the law and order situation in UP deteriorated horribly since Yogi Adityanath assumed office.

“Atrocities against women escalated and UP became the rape capital of the country after BJP came to power. Now, the safety and security of ordinary people at stake in UP even nobody can travel freely”.

Sabi Ahmad said the UP government wants to divert attention from the real issue by arresting our members who are innocent and going to share the grief of the victim’s family. He said it is a matter of concern that the government wants to crush any voice of dissent.

Campus leaders alleged that the Yogi government is hatching a conspiracy to protect rapist’s upper caste Thakur men. “There were enormous attempts to tamper with the statement of the victim and the police at one stage even claimed that there was no proof of rape.”

Leaving Dalits in insecurity and terrorising Muslim youth is an established agenda of BJP and Yogi Government is plotting to further this agenda, they added.

Releasing a statement, the student body said: “It is a BJP delusion proposed by RSS that they can suppress the fight for justice by slapping horrible charges and creating an atmosphere of terror. We will not be taken aback by these intimidation tactics and we will fight this enormity through every possible legal and political manner. We appeal to the people of India to come forward jointly to deliver justice to the Dalit girl and these arrested persons.”

Party national president, Dr SQR Ilyas underlined that Popular Front of India is a registered organization in the country and has not been banned.

He said the UP government under the administration of Mr. Yogi Adityanath is moving towards anarchy with lawlessness and rampant impunity.

Instead  of providing justice to the family and improving the law and order situation, the UP govt wants to deliberately attempt to communalize the atmosphere of the state by diverting the attention of the people from the utter state failure to protect the life, property and dignity of Dalits, Muslims and Women, he added.