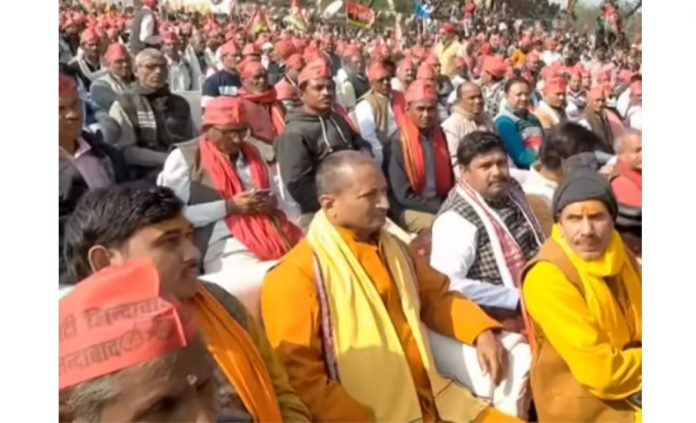 The open battlelines between the ever two warring sections of Upper Caste Hindus i.e. Brahmins and Thakurs is now available on the streets, as Brahmins, the unanimous ruling class across India, feels to have been let-down by the Thakur BJP CM Ajay Singh Bisht in UP. It has been practically more than three decades when there was last a Brahmin CM in UP. Brahmins strived for the rank but were discarded and since the last five-years have been elbowed by the Thakurs in the state.

The ‘pain and anguish’ of Brahmin community, which has been in the forefront of its support for BJP along with Banias ( business community) and Thakurs is all splurged on the screen, and this was openly witnessed by the grouse, the Brahmins have in totality against the BJP government, in Rae Bareli on December 17.

The Brahmin community members were found seated in the front row at Unchahar, in Rae Bareli, while Samajwadi Party Chief Akhilesh Yadav, addressed the rally, where of course, there was a human ocean to listen to him. The Brahmin community is the uppermost crust of the Hindu society and since the last 70 years have been the ruling ‘clan and class’ and no doubt has occupied all the state resources, but after the implementation of the Mandal Commission report in 1990, all the Upper Caste Hindus, have started to feel the heat of the Backward Classes nudging for their space in the state apparatus. BJP, in order to counter it, devised a plan, forcing a Ram Temple movement and pitching the Hindu society in all togetherness against Muslims. BJP wanted to monopolize being the sole champion of the Hindu cause, yet the perennial faultiness from inside the Hindu society have also been visible time and again.

The conflict now is about sharing the state-resources and also to monopolize it, if not to hegemonize it, as all the societies under the sun want their share in governance, hence, there is now a clash of ideologies i.e. socialism and the rule-of-the-elite, which primarily had been the Congress rule and now inherited by the BJP. Notwithstanding the historical differences between the Thakurs and Brahmins, which still go on unabated and this is what exactly is expressed by the Brahmins today as against the Thakur CM of UP.

Those who had got collected in Unchahar were Brahmin teachers who were well versed in the Sanskrit language, and openly complained that the present BJP government has shut-the-doors of Sanskrit Degree Colleges from where the Brahmin students were to learn their ethics, and that on the contrary, the previous SP government ( 2012-17) had given an aid to them. What is also to be known, according to various reports from newspapers, is that ‘Of the 958 Sanskrit schools offering the subject from classes 6 to 12, 117 of them do not have a single teacher left, while 58 government-aided Sanskrit-medium secondary schools have already (got) closed down due to a shortage of teachers’, informed The Hindustan Times in September last year.

The situation, as can be understood, has far worsened until today, primarily as the whole last year was consumed by the disastrous handling of the second wave of Covid-19 by the government, and this year too, there hasn’t been anything concrete except for the fact that BJP government has closed down more Sanskrit Secondary Colleges in UP. The Brahmin Samaj people who had congregated opined that Kashi corridor might have been made but BJP government has done nothing for the Brahmins, and that now Sadhu-Sant ( the Brahmin priests) and other sections of society are to vote en bloc against BJP.

The collected Brahmins were not the typical sponsored crowd-the way BJP mobilizes them, and openly engaged into lambasting the saffron robes worn by AS Bisht and said that just by donning such clothes one does not qualify to be a man of masses, unlike what Akhilesh Yadav is. Some even claimed that the policies of AS Bisht has brought everyone to penury, all the while, as stray cattle eat the harvests and the render the cultivations useless. Probably everyone echoed that the farmers are being forced to die-of-hunger and that the red-colour is that of Lord Hanuman which is what is the verve of SP.

The sentiment aired by the Sant Samaj is an ample proof of the anger which is seething inside the Brahmin society towards the BJP, more particularly so, when it is only BJP which is the party to have fomented the Sadhu-Sants as their forte, and now has abandoned them too. Remember the recent statement of BJP General Secretary PM Rao, that Brahmins and Banias are in his pocket! There can be no doubt that the Sadhu-Sant Samaj is the core vote bank which galvanizes and gravitates people towards the BJP fold and which now is found to be slipping. Apart from this is the issue of the Brahmin ‘murders and encounters’ in the last five years in UP. This issue is what primarily bogs down the whole Brahmin community as it is alleged that more than 500 Brahmin murders in UP in the last five years, have taken place, apart from the around 20 fake police encounters!

There is now a growing list of disgruntled communities leaving BJP and its bandwagon. There are reports of Brahmin exodus from Gorakhpur-the home town of AS Bisht, of Thakurs venting anger against BJP from Etah, the Nishad community has openly condemned BJP’s anti-reservation mindset, OP Rajbhar party has distanced itself from BJP and Krishna Patel of Apna Dal too, and now also the estranged uncle of Akhilesh Yadav has made overtures to come-close to SP. No wonder, this all is showing massive chinks in BJP armour, whose only resort is communalism (against Muslims) and towards the ready-made politics of polarization, as was witnessed in the selective-hunting of Muslim’s history in the Kashi Corridor inauguration.

But, now UP does not seem to get entangled as one cannot fool all the people all the times.