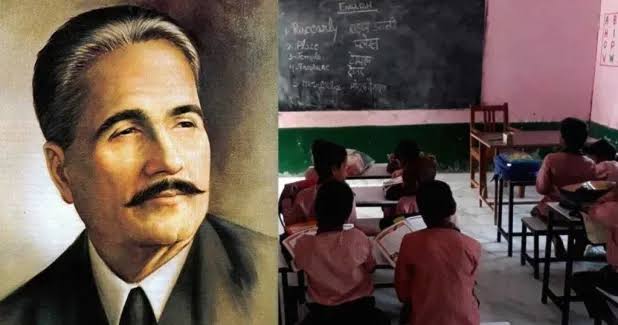 After a video of students reciting “Lab Pe Aati Hai Dua” by Allama Muhammad Iqbal during the morning assembly went viral, a Shiksha Mitra and the principal of a government school in Bareilly, Uttar Pradesh, reportedly were booked for “hurting religious emotions.”

In response to a complaint by Sompal Singh Rathore, a local Vishwa Hindu Parishad (VHP) leader, who said that a “religious prayer” was offered at the public school in an effort to convert the kids, an FIR was filed at the Fareedpur police station against Siddiqui and Wazeeruddin.

In his police complaint, the VHP official claimed that Wazeeruddin and Nahid Siddiqui were coercing pupils into repeating Muslim prayers in an effort to convert them to Islam while also trying to offend Hindu sensibilities.

Police have filed a First Information Report (FIR) against the two instructors under sections 298 (deliberate intention to wound religious sentiments) and 153(provocation with intent to cause riot) of the Indian Penal Code (IPC) after taking notice of the complaint.

According to Rathore, as part of prayer, one should recite the national anthem and “Saraswati Vandana.” However, the headmaster made the students sing “O Allah, shield me from evil” (Mere Allah Burai Se Bachana Mujhko). He said that to convert the pupils, the teachers made Hindu students chant a “religious prayer.”

The reported event occurred at Kamla Nehru Composite Vidyalaya in Faridpur, Bareilly district. The school has about 265 children, the majority of whom, according to the instructor, are Muslims.

The school’s principal, Nahid Siddiqui, has been suspended by the Education Department while Shiksha Mitra Wazeeruddin is also being investigated.

Earlier in 2019, a headmaster in the state’s Pilibhit district was also suspended after the children were heard singing the same poem. The authorities took action in response to a complaint from the local unit of the Vishwa Hindu Parishad.

Iqbal’s poetry was based on social justice , over 4500 books have been written on him