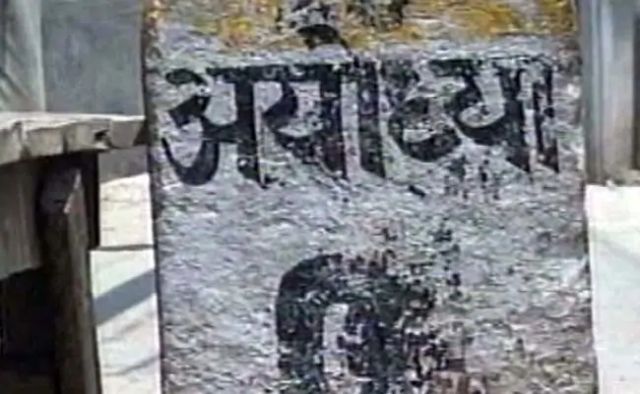 Another section of residents, however, welcomed the Uttar Pradesh government’s move, saying it endorses the legacy of ancient Ayodhya and will enhance its “glory”.

Faizabad: The decision to rename Faizabad district as Ayodhya has not gone down well with many of its residents, who believe it is an “unnecessary step” taken for “political” reasons and will eventually “erase the identity” of the historical town.

Another section, however, welcomed the Uttar Pradesh government’s move, saying it endorses the legacy of ancient Ayodhya and will enhance its “glory”.

PK Maurya, a 74-year-old Ayurvedic doctor, gets visibly upset when asked about the renaming move.

“What was the need for it? It was unnecessary and done with politics in mind. It is the common man who will suffer due to confusion now,” he told PTI.

Mr Maurya runs a dispensary in a run-down colonial-era building near the 19th century ‘Ghanta Ghar’ (Clock Tower), with an old board on its facade displaying the address as “Chowk-Faizabad” in Hindi.

Many other shops and commercial establishments in the area carry boards with district name labelled as ‘Zilla Faizabad’.

“I won’t change the label of Faizabad on the display board, people have known my dispensary location for decades. I don’t want people to get mixed up,” said Mr Maurya, a third-generation Ayurvedic doctor in his family.

Faizabad city is located about 7 km from its twin town Ayodhya and has a major railway junction.

Close on the heels of renaming Allahabad as Prayagraj, Uttar Pradesh Chief Minister Yogi Adityanath had on November 6 announced that Faizabad district would henceforth be known as Ayodhya district.

“Ayodhya is a symbol of our ‘aan, baan aur shaan‘ (honour, pride and prestige),” he said in the pilgrim town, about 120 km from state capital Lucknow.

Yogi Adityanath’s announcement at a pre-Diwali ‘Deepotsav’ event in Ayodhya’s Ram Katha Park drew loud cheer, amid a growing chorus in the ruling Bharatiya Janata Party (BJP) and the Sangh Parivar for the construction of Ram temple at the Ramjanmabhoomi.

Deepak Pandey, 18, who attended the ‘Deepotsav’ event, said, “I am happy the district’s name has been changed. It was needed.”

Shashi Kant Das, one of the main priests at the centuries-old Hanuman Garhi Temple in the heart of Ayodhya, said it was the “right decision” as Ayodhya is an ancient city and now its “glory will only be enhanced as a district”.

Skand Das, an Ayodhya-based journalist of a local daily, which also has an office in Faizabad, however, disagreed with this viewpoint.

“People today come to Ayodhya with a lot of reverence, and sometimes take difficult bus or train journeys or even march on foot, to reach the pilgrim town. Now, anyone reaching even in the periphery of this big district will say they have visited Ayodhya. This will dilute the importance of Ayodhya town as we know it,” he said.

Nikhil Goswami, who lives in a nearly 200-year-old house near the disputed Ramjanmabhoomi in Ayodhya, said he reveres Ayodhya as a holy place but the renaming of Faizabad district was “not needed at all”. “It is all politics,” he alleged.

Manzar Mehdi, historian and editor of a Faizabad-based bilingual publication, said, “Faizabad was the first capital of the Nawabs of Awadh and saw a period of glory and has a rich architectural and literary heritage.”

“Whether it is Allahabad or Faizabad, renaming is an attempt to erase history driven by a political agenda, not to mention the cost it will entail at the expense of taxpayers,” he told PTI.

Mr Maurya and many other Faizabad residents, like Raziuddin, a ‘paan’ seller, and Altaf Qureshi, an e-rickshaw driver, argued that the renaming will “erase the identity of the city” and create confusion in finding addresses or travelling by road or train.

Raziuddin said Faizabad has its own history as a city and the heritage buildings built by the Nawabs of Awadh here, like Gulab Bari, Moti Mahal, Bahu Begum ka Maqbara showcase that historical link.

“The renaming will ensue crores of expenditure, that they could have spent on the restoration of these poorly-kept structures,” Mr Maurya said.

Siva Kumar, who operates an e-rickshaw between Ayodhya and Faizabad towns, wondered if like Mughalsarai, the Faizabad station would also be renamed. “If they do rename it, there will be two Ayodhya stations, it will confuse people.”

Anil Arya, who runs a shop in the arcade underneath the iconic Clock Tower, said, “I am happy and sad. I like both the places. They could have made Ayodhya into a district itself instead of renaming old Faizabad.”