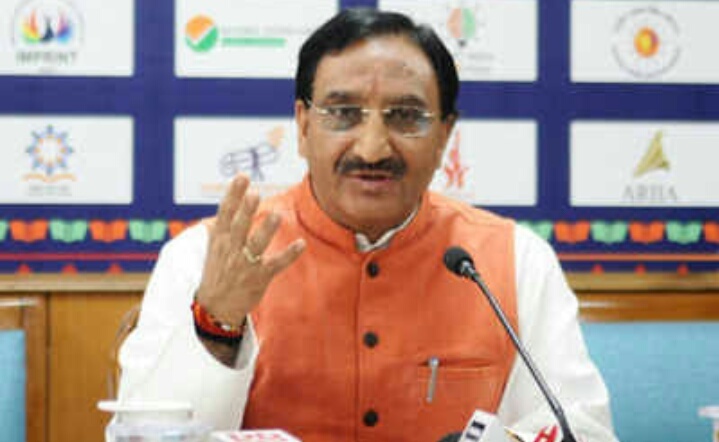 New Delhi : Pouring his heart for mesmerizing charm of Urdu language Union Education Minister Shri Ramesh Pokhriyal said “Urdu  is a language of not only composite culture and interfaith bonds but also of humanness and heart and soul.

He added  that this webinar has been conducted to celeberate the quintessential spirit of Urdu, its inclusive ethos and creative character. He was proud to declare that today NVPUL has become the biggest Urdu networking hub in the world. Shri Nishank also said that the Prime Minsiter Shri Narendra Modi himself is a lover of Indian cultural heritage and believes that the world is progressing and in this situation, no language can establish a strong connection with its readers without the help of modern technology and that’s why NCPUL aided by technology, it’s touching new heights today. The plethora of Urdu websites is testimony to its continuing popularity.

The Education Minister also made an important announcement and said that Urdu writers and literators will be honoured with awards and honours in the name of important personalities of Urdu like Amir Khusrow, Mirza Ghalib, Agha Hashar, Ram Babu Saxena and Daya Shankar Naseem to encourage Urdu writers for literary and creative services by the Urdu Council from next year.

Prof Shahid Akhtar, the Vice Chairman, NCPUL said that these are the days webinars and Wi-Fi technology where everything has been condensed into a smart phone via social networking and hence, Urdu too has to be techno-savvy to come at par with the other languages.

Dr Aquil Ahmed, the Director, NCPUL stated that he was thankful that under the Modi-led governance, the NCPUL had almost a double hike in its budget. He also stated that the purpose of all the Indian and international languages is to achieve the spirit of fraternal ambiance and ecumenism. He also thanked the Prime Minister and the Ministry of Education for the very well deserved and able support to Urdu that was created in the northern region of India.

Eminent Urdu professor, Zaman Azurdah said that the writers, poets and authors are the eyes of the entire social, religious and political system and they have a huge responsibility towards their connoisseurs and the lovers of the language and literature and hence, have to be very positive.

The participants also exuded the fact that Urdu happens to be a language of the conglomerate tradition and culture of India that, after being acquired by the Khanqahs, educational institutions and the official world, also became the language of market.

The other participants on account of the NCPUL, that is Tehseen Munawwar, Ajmal Saeed and Dr Kalimullah too conducted the session very competently and professionally. The academic in charge of the NCPUL, while thanking all the dignitaries and the participants, said that Urdu is not only the of language of the heart but future.

India’s new education policy will be based on ‘Vedic knowledge and science’ : says HRD Minister