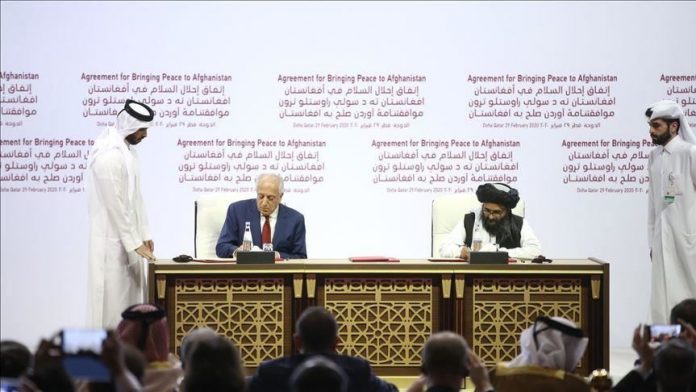 KABUL, Afghanistan, Feb 29  :Two landmark conferences in Doha and Kabul saw historic decisions made regarding the fate of war-ravaged Afghanistan.

The U.S. signed a landmark deal with the Taliban on Saturday, laying out a timetable for a full troop withdrawal from Afghanistan.

The agreement is expected to lead to talks between the Taliban and the Kabul government in a bid to pave the way for an end to the 18-year conflict.

Baradar pledged to abide by the terms of the peace deal and thanked Pakistan, Iran, China and Russia for their role, urging them to help rebuilding the war-torn country.

“I call upon all Afghans to come together for Islamic values,” he said.

Taliban head Mawlawi Hibatullah Akhundzada urged “Mujahideen to solidify, organize and bolster their ranks so that they can attain their objective of establishing an Islamic government.”

Under the accord, Taliban have agreed not to allow al-Qaeda, Daesh or any other militant group to operate in the areas they control.

The U.S. and its allies, after an initial reduction of troops from roughly 13,000 to 8,600 within 135 days, will move towards a complete withdrawal within 14 months.

At the height of the war, which started weeks after the September 2001 attacks in New York, Afghanistan had more than 100,000 American troops and tens of thousands of others from the U.S.-led NATO coalition.

The deal also provides for a prisoner swap, and the U.S. lifting sanctions against the Taliban.

The Doha accord was drafted over a turbulent year of dialogue. Khalilzad held at least nine rounds of talks with the Taliban. The marathon negotiations also saw the abrupt cancellation of the effort by U.S. President Donald Trump last September.

The signing came after a week-long truce to end violence across Afghanistan.

Joint declaration between US, Afghan government

Meanwhile in Kabul, the U.S. and NATO issued a joint declaration, reiterating enduring support for the Afghan government.

He said reservations on the deal remained, which would be discussed in the forthcoming talks.

According to the joint declaration, Washington and Kabul have expressed commitment to end the war in Afghanistan for the benefit of all Afghans and bring peace in the region.

Washington has also re-affirmed its commitment to release funds on a yearly basis that support the training, equipping, advising and sustaining of Afghan security forces to defend the country against internal and external threats.

The Afghan government, meanwhile, has pledged to participate in a U.S.-facilitated discussion with Taliban representatives on confidence building measures such as release of prisoners.

It has also committed to start diplomatic engagement with members of the UN Security Council to remove Taliban members from the sanctions list with the aim of achieving peace by May 29, 2020. AA