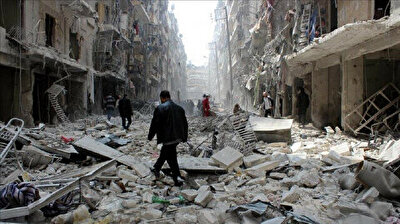 ANKARA:  The US and the international coalition forces it leads are being held responsible for the deaths of thousands of civilians in Syria.

A Monday statement by the US Defense Department that they ordered an investigation into the March 18, 2019 airstrike in the Syrian town of Baghuz, which killed dozens of civilians, brought to mind other crimes committed by US-led coalition forces against civilians in Syria.

The US-led coalition forces, which started a military intervention in Syria on Sept. 23, 2014 using the justification of combating the terrorist group ISIS/Daesh, acted in partnership with the terrorist group YPG/PKK – the Syrian branch of the terrorist PKK – on the ground and bombed schools, mosques, and many other civilian areas.

A report by the Syrian Network for Human Rights (SNHR) said that since Sept. 23, 2014, US-led coalition forces killed more than 3,000 civilians on the pretext of fighting terrorism.

According to the report, over the course of six years at least 172 massacres (attacks in which at least five people were killed) were committed by coalition forces.

Coalition forces carried out more than 180 attacks on regions where civilians live, including schools, health centers, mosques, and bazaars.

More than 500,000 civilians immigrated and became homeless during the US and coalition attacks.

Declaring that they achieved victory against ISIS/Daesh in Syria in 2019, the US left the management of the regions which ISIS/Daesh had withdrawn from to the terrorist group YPG/PKK.

The US and coalition forces did not even pay compensation to the civilians they killed or whose houses they bombed.

In its more than 35-year terror campaign against Turkey, the PKK – listed as a terrorist organization by Turkey, the US, and the EU – has been responsible for the deaths of at least 40,000 people, including women, children, and infants.

Turkey has repeatedly protested the US working with and supporting the terrorist YPG/PKK, saying that using one terror group to supposedly fight another makes no sense.-AA

Turkey lauded for its generosity towards Syrians