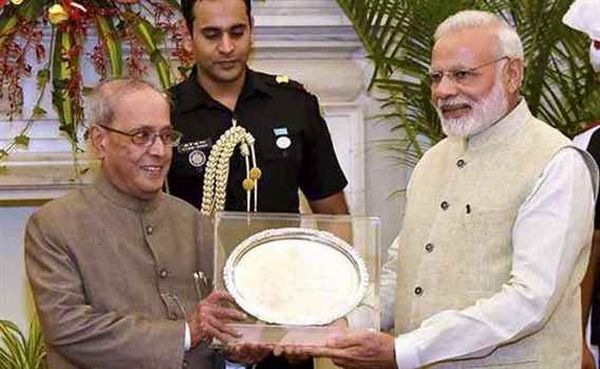 New Delhi : Outgoing President Pranab Mukherjee on Sunday gave a message to both government and opposition telling them ordinance route should be used only in compelling circumstances, disruption harms the opposition too and passing bills without discussion was a breach of the people’s trust.

Addressing a farewell function held in the Central Hall of parliament by the members of both houses, Mukherjee described himself as “humble servant” of people who had sought to preserve, protect and defend the Constitution in both word and spirit.

A nostalgic Mukherjee, who will demit office on Tuesday, recalled that he was only 34 years old when he first entered parliament in 1969 as a Rajya Sabha MP and went on to complete 37 years as a parliamentarian – where he “understood the real value of debate, discussion and dissent” – before being elected to the highest constitutional post.

Lok Sabha Speaker Sumitra Mahajan read out the farewell address by the lower house’s members, describing him a “guru” from whom generations of parliamentarians have received lessons on operational dynamics of parliamentary practice.

Vice President Hamid Ansari, who is also Chairman of Rajya Sabha, cited Mukherjee’s remarks at a farewell dinner for Governors and Lt Governors last week in which he had said that their role is “mainly confined to giving advice to Chief Minister” as “there cannot be two functional executive authorities in a state”.

Mukherjee was presented a scroll, a memento and a book containing signatures of the parliamentarians.

In his speech, which received repeated applause, the president addressed both the government and the opposition.

“I am firm in my opinion that the ordinance route should be used only in compelling circumstances and there should be no recourse to ordinances on monetary matters,” he said, adding it should not be brought on matters pending in the house or before a committee and if a matter is deemed urgent, the committee should be asked to present its report in a stipulated time.

He said it is “unfortunate” that parliament’s time devoted to legislation has been declining.

“With heightened complexity of administration, legislation must be preceded by scrutiny and adequate discussion. Scrutiny in committees is no substitute to open discussion on the floor of the House.

“When Parliament fails to discharge its law making role, or enacts laws without discussion, it breaches the trust reposed in it by the people,” he added.

Mukherjee said he realised as a parliamentarian that disruptions of proceedings “hurts the opposition more than the government as it denies them the opportunity to raise the concerns of the people”.

Mukherjee remembered his “mentor”, former Prime Minister Indira Gandhi, terming her a “towering personality” who had the courage to call a spade a spade.

Praised Prime Minister Narendra Modi, he said he had greatly benefitted in his task of protecting and preserving constitution by advice and cooperation given by Modi at every step.

“With passion and energy, he is driving transformational changes in the country. I will carry with me fond memories of our association and his warm and courteous behaviour,” he said.

Mukherjee rued that as he retires, his association with Parliament will also end. “It will be with a tinge of sadness and a rainbow of memories that I will be leaving this magnificent building today,” he added.

“With a sense of gratitude and a prayer in my heart, I take leave of you. I leave with a sense of fulfillment and happiness of having served the people of this great country through this institution — as their humble servant.”