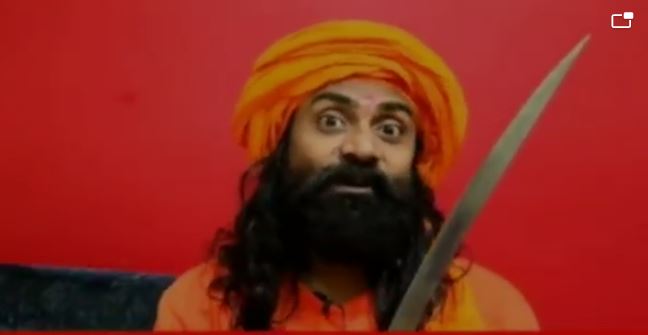 New Delhi : In time of a pandemic when people are dying on roads Hindutva extremists are planning to wage a civil war against Muslims in India.

In a viral video, a Hindutva  priest Swami Jitendranand Saraswati has asked people to have swords at their houses.

The video was  also uploaded on his Youtube channel.

Saraswati, who belongs to Uttar Pradesh, says, ”This [sword] is the dearest thing to the mother…. Every person from the community needs to have this thing, which is dearest to the mother, to save themselves from ”ghosts”. ”I am saying it in legal terms. You will understand who are ghosts?”

In the video, he uses religious terms and goes on to saying that the language he is using is a legal one. But his followers can decode who are ”ghosts”. He apparently meant minority communities including Muslims by the word ”ghosts”.

He further shared a mobile number asking ”Hindu brothers” to order swords. He added that his organisation will supply swords to their houses after they give a request for the same though that particular mobile number.

Saraswati is not alone. Several other Hindu priests have been uploading provocative speeches on social media and radicalising Hindu youths. It is due to their provocation that persecuted communities continue to be targeted physically and virtually as well.

In another video a Hindutva militant has declared 3rd May 2021 to wage an all-out war against Muslims in three Indian  states including Maharashtra.