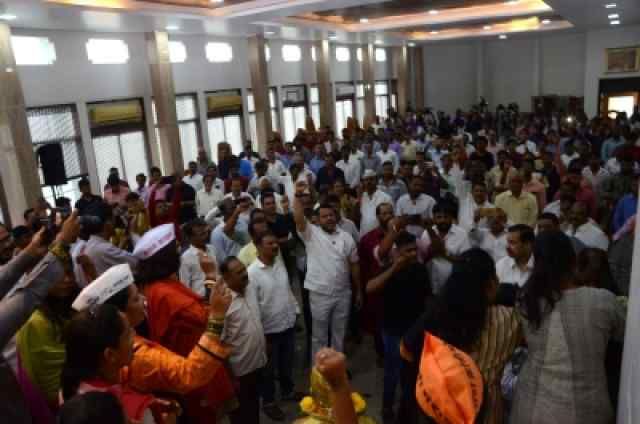 Aurangabad (Maharashtra) : A policemen and four others were injured, four persons attempted suicide, over a dozen vehicles damaged or torched, road and rail links blocked while a MP and MLC were roughed up, as the stir for the Maratha quota turned violent in parts of Maharashtra on Tuesday.

Several Maratha organisations have now called for a “Mumbai shutdown” on Wednesday, with the Maratha Sakal Samaj (the state-level body) appealing to all community members to observe it peacefully.

“Thousands of people are returning from the Pandharpur festival so Mumbai and Konkan region shall observe a shutdown on Wednesday. We appeal to all people to maintain peace and discipline,” said Maratha Kranti Morcha Convenor for Mumbai, Virendra Pawar.

Starting with Aurangabad, a series of processions were taken out on Tuesday in various districts of northern, western Maharashtra and Marathwada with thousands taking to the streets demanding reservations in government jobs and education.

Roads were blocked in Aurangabad, Osmanabad, Pune, while a fire brigade van, a bus and a truck (in Aurangabad), a police van (in Hingoli), at least five state transport buses (in Kolhapur), were pelted with stones and other several vehicles also damaged by angry Marathas, while there was rail blockade for half an hour at Parbhani this afternoon.

The Mumbai-Agra National Highway in Nashik was blocked, while protests were carried out in Nanded, Jalgaon, Parbhani, Kolhapur, Osmanabad, Ahmednagar, Jalna, Nandurbar, Yavatmal and Akola districts, and roads were blocked by burning tyres in Nashik and Hingoli.

In view of the violence, state transport bus services were suspended in Aurangabad, Osmanabad and Nanded, stranding thousands of passengers in the moffusil areas, while a silent protest procession was taken out in Nagpur, though Mumbai, Thane, Navi Mumbai and some other cities remained unaffected by the shutdown on Tuesday.

As a precautionary measure, the authorities suspended internet services in Aurangabad, some schools and colleges remained shut in Nanded, Osmanabad and certain other places, even as the protests subsided by evening.

Several districts observed a spontaneous shutdown on Tuesday, mourning for Kakasaheb Dattatreya Shinde, 28 who committed by jumping in the River Godavari in Aurangabad’s Kaigaon on Tuesday.

At his funeral – which witnessed a huge turnout in his native Kaanad village – angry Marathas objected to the presence of Shiv Sena MP Chandrakant Khaire and roughed him up, forcing him to make a hasty exit in his vehicle. Similarly, Congress legislator Subhash Zambad was also manhandled and had to be whisked off to safety by police.

A policeman from Osmanabad, Shyam Katgaonkar, posted on duty in Kaigaon for the funeral security, suddenly collapsed and died of heart attack here this afternoon.

Earlier, the Maharashtra government announced a compensation of Rs 10 lakh for Shinde, but various parties including Congress, Nationalist Congress Party and Shiv Sena have demanded Rs 50 lakhs as the issue figured in the Lok Sabha.

In Aurangabad, two persons Jayant Sonawane and Jagannath Sonawane, attempted suicide by jumping into a river and consuming poison respectively, but both were rushed to a hospital and are under treatment.

In Beed, two persons sought to commit suicide by jumping from the building terrace of the Tehsildar office, but police prevented them at the last minute.

Various prominent groups held meetings in different parts of the state for finalizing the main programme of a Maharashtra shutdown on August 9 – celebrated as August Kranti Divas – to intensify the ongoing two-year old agitation.

Meanwhile, speaking on behalf of the government an embattled Revenue Minister Chandrakant Patil, who was in Sangli, urged the Marathas to remain calm and call off their agitation.

“Agitations, violence and protests will not ensure reservations. We are keen that the Maratha community should get reservations… we have to consider various aspects,” he said.

Patil, and Education Minister Vinod Tawde added that since the matter is sub-judice before Bombay High Court and the Bharatiya Janata Party government was trying its best to resolve the issue.

Preparing for Wednesday’s shutdown, the police have made deployed tight security in the country’s commercial capital and are in touch with Maratha leaders to ensure a peaceful agitation, said Deputy Commissioner of Police Deepak Deoraj.

The Congress, Nationalist Congress Party and Shiv Sena have urged the ruling BJP government to immediately resolve the long-pending Maratha reservations issue for which the community is agitating peacefully since over two years.