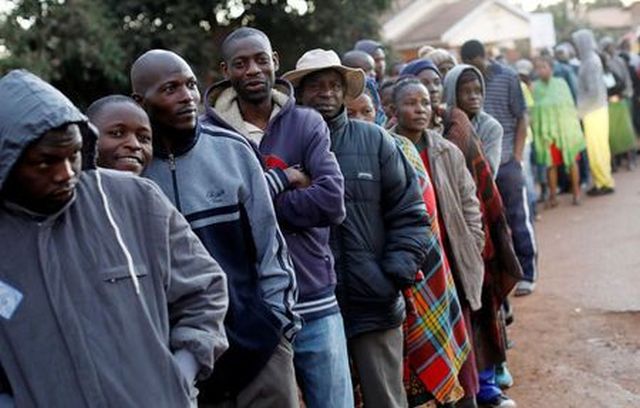 Voting for the presidential, legislative and municipal elections began at 7 a.m. and soon queues had formed in front of many polling stations in the capital here and other parts of the country, Efe news agency reported.

Mnangagwa, 75, has a narrow advantage over his 40-year-old rival. The latest opinion polls have shown a three-percentage-point lead for Mnangagwa over Chamisa.

On Monday, Mugabe who first came to power after independence in 1980 and is the country’s founding President said he would not vote for his successor. Mugabe was ousted in a coup in 2017 after almost four decades in power.

If the winner does not secure more than 50 per cent of the votes, a second round of the elections will be held on September 8.

The country is expecting a high turnout of first-time voters, where the youth vote is expected to be the key. Almost half of those registered are under the age of 35.

There are 5,635,706 voters who have re-registered for the poll as the opposition still harbours doubts about its accuracy.

Hundreds of international observers have been deployed to ensure the vote goes smoothly, but the opposition has repeatedly alleged irregularities in the voters’ roll, the BBC reported.

It has been 16 years since EU and US observers were allowed to monitor the elections.

The observers have expressed concern over the security of ballot papers and voter intimidation mainly in the rural areas.

The election follows decades of repressive rule which has brought severe economic challenges to Zimbabwe including issues of investment, education, healthcare and jobs.

The unemployment rate is estimated to be as high as 90 per cent, the BBC said.

President Mnangagwa, who is known as “the crocodile” for his political shrewdness, has promised to deliver jobs. He has survived several assassination attempts blamed on supporters of Mugabe.

Chamisa, who became an MP at the age of 25, could become the country’s youngest president if elected.

Chamisa has promised to rebuild the country’s devastated economy, but been criticised for making extravagant promises — such as the introduction of a high-speed bullet train and bringing the Olympics to Zimbabwe.

Following favourable comments by Mugabe for the qualified pastor at a surprise news conference on Sunday, Mnangagwa said it was clear to all that Chamisa has made a deal with Mugabe.

RTI throws up EVM irregularities in Maharashtra, UP poll commissions too (Part II)