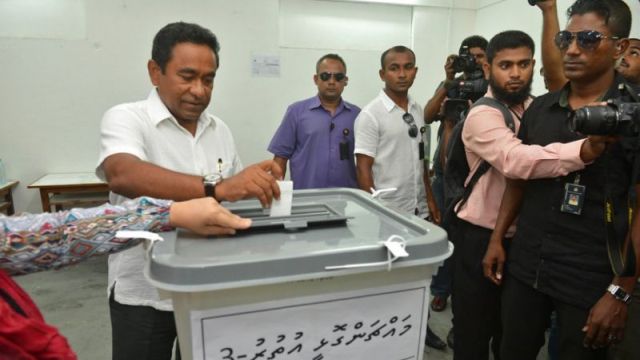 Male : Voting was underway on Sunday in a heavily-criticised presidential election in the Maldives that has been gripped by political upheaval .

Thousands of voters queued up outside polling centres across the country that opened at 8 a.m., the country’s Election Commission (EC) said.

According to the EC, 262,135 voters are set to cast their votes, reports Xinhua news agency.

The heavily-criticised election will be closely watched by India and China as President Abdulla Yameen has embraced Beijing, while his opponent, Ibrahim Mohamed Solih, is seen as leaning towards New Delhi and the West, according to the BBC.

The European Union and US have voiced concerns about the election and have threatened to impose targeted sanctions if the democratic situation does not improve.

On Saturday, police officers searched the opposition Maldivian Democratic Party office in Male without a warrant, the party said.

A police spokesperson confirmed the raid to the BBC, without providing further details.

The opposition coalition says the Maldives election commission is working on behalf of Yameen and will not allow observers to verify individual ballot papers, which could allow “massive vote counting fraud”.

The upheaval in the archipelago worsened after the Supreme Court in February quashed the convictions of nine opposition figures, among them exiled former President Mohamed Nasheed, who was ousted from office in 2012.

But after President Yameen declared a state of emergency and ordered the arrest of two judges, the court reversed its decision.

Yameen has also shrugged off accusations of authoritarianism, saying during the campaign: “No-one will come to greet me and shake my hand, if there is tyranny.”