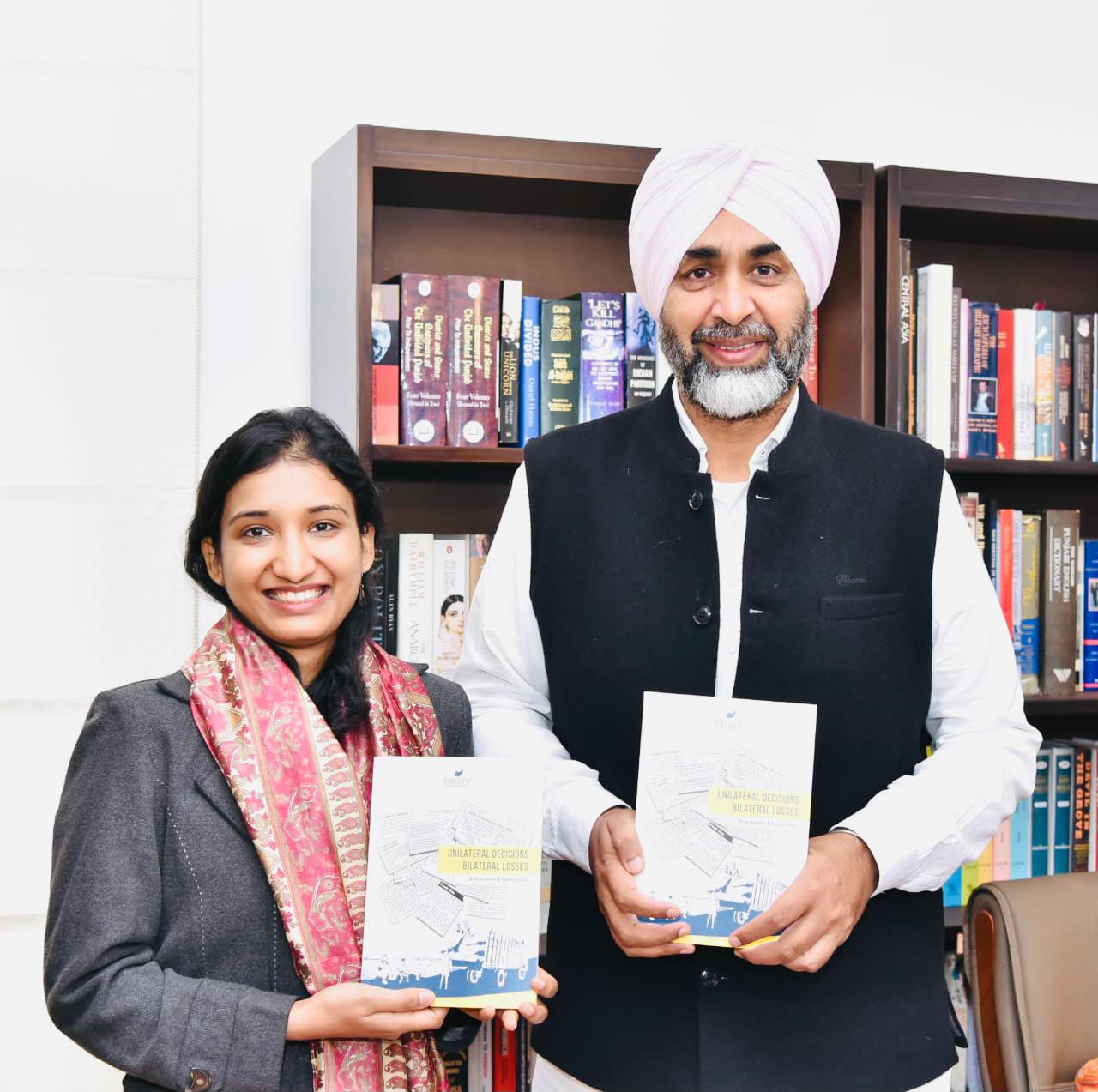 Chandigarh: International Wagah-Attari trade route is not just a road between India and Pakistan, but it is vital for prosperity and peaceful relations between both the neighbouring countries, said Manpreet Singh Badal, Minister for Finance of Punjab. He was speaking after launching a book “Unilateral Decisions Bilateral Losses” on Thursday here at his official residence.

He said the Wagah-Attari route, reaching up to Central Asia, will remain crucial for the economic upliftment and social welfare of the people of Punjab.

“German Statesman Otto Von Bismark once remarked-the road to Berlin lies through Vienna. I sincerely feel that the road between New Delhi and Islamabad lies through Punjab. For Punjabis, a lot is at stake given their proximity to the shared border,” he underlined.

Gauging the points rose to lessen the international trade losses in the book, Badal expressed grave concern over the current situation of trade with neighbouring countries. “I, on the behalf of the Punjab Government, will pursue the case to revive the Wagah-Attari trade with the Government of India”, said the finance minister, while adding that there are immense trade opportunities in the state.

Notably, Since February 2019, India-Pakistan relations have been sliding downhill after the militant attack in the Pulwama district of Jammu and Kashmir. The Indian government decided to withdraw the status of Most Favoured Nation (MFN) for trade granted to Pakistan since 1996.

“Trade at Wagah-Attari had made this shared border a point of cooperation and interdependence. Highlighting the losses on ground because of the suspension of trade, this makes it evident how over time, trade has become crucial for the survival of the border economies, revival of which could lead not just to prosperity but also lay the foundation for peaceful relations between India and Pakistan”, pointed out Badal.

Virtually, joining the discussion on the book, Member of Parliament from Amritsar. Gurjeet Singh Aujla said, Amritsar doesn’t have any real industry except for tourism which is also badly affected due to COVID-19, urging the GoI to consider Wagah-Attari trade as a full-fledged industry for Amritsar that gives direct and indirect employment to more than 25,000 families. Revival of the trade is very important for the border district.

The book is written by Afaq Hussain and Nikita Singla, the Director and Associate Director of Bureau of Research on Industry and Economic Fundamentals (BRIEF) respectively, a New Delhi-based research and policy think tank.

In their book, the authors cited that in 2018-19, the bilateral trade between India and Pakistan stood at USD 2.5 billion – India’s exports to Pakistan accounting for USD 2.06 billion and India’s imports from Pakistan at USD 495 million. India’s decision vis-à-vis MFN withdrawal and imposition of 200% duty brought Pakistan’s exports to India from an average of USD 45 million per month in 2018 to USD 2.5 million per month in March-July 2019, until trade was completely suspended by Pakistan.

The book also highlighted the socio-economic impact of trade suspension assessed through field research in Punjab. As the trade communities, and the citizens at large, stand by the decisions of the government, the book makes a call to identify adequate measures that could be taken towards sustaining the border economy of Punjab, in the absence of cross-border trade. According to the authors’ interactions in Amritsar, more than 9,000 families were directly affected because of their breadwinners’ dependence on bilateral trade; and every month, two-thirds of nearly INR 30 crore that was being added to the local economy was lost.