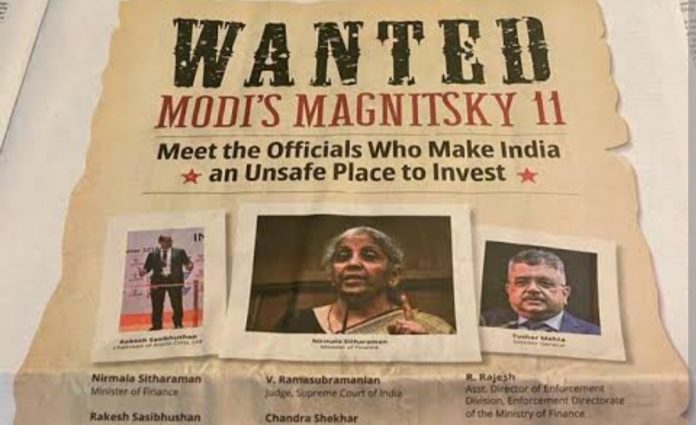 A controversy erupted on Saturday over a full-page ad in the prestigious US newspaper Wall Street Journal criticising Finance Minister Nirmala Sitharaman and ten other senior government officials.

The advertisement referred to them as “Modi’s Magitsky 11,” officials who make India “an unsafe place to invest.” At the bottom, there is a QR code that connects to the website of the US-based think tank Frontiers of Freedom.

Shameful weaponisation of American media by fraudsters.
This shockingly vile ad targeting #India and its Government appeared in @WSJ .
Do you know who is behind this and similar ads?
This ad campaign is being run by fugitive Ramachandra Vishwanathan, who was the CEO of Devas.
n1 pic.twitter.com/o7EWFmMsSR

Since Sitharaman is currently in Washington for the annual meetings of the International Monetary Fund and the World Bank, the timing of the advertisement has also drawn considerable attention. The finance minister arrived in Washington on October 11 and will stay there through October 16.

“These Modi Government officials have decimated the rule of law by weaponising the institutions of the state to settle scores with political and business rivals, making India unsafe for investors,” the ad says.

“We have asked the US government to impose economic and Visa sanctions against them under the Global Magnitsky Human Rights Accountability Act. Under Modi, a decline in the rule of law has made India a dangerous place to invest. If you are an investor in India, you might be next,” reads the ad published on 13 October.