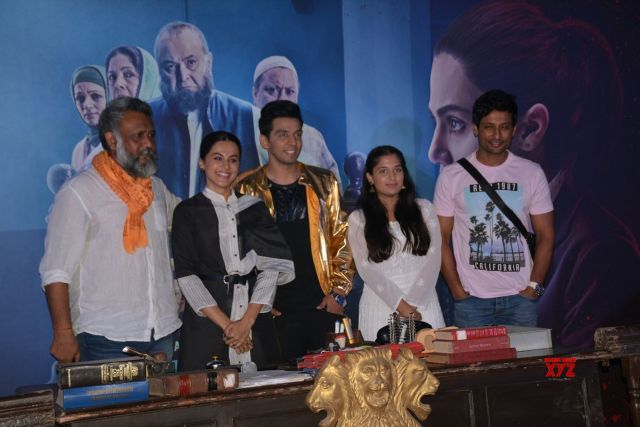 Mumbai : Filmmaker Anubhav Sinha, who has reacted strongly to the trolls who have labelled him anti-Hindu based on the trailer of his forthcoming film “Mulk”, says people should watch the full movie before making statements.

The trailer of “Mulk” released on July 9. Soon after, the director received various comments and reactions on the trailer. He says only 20 per cent of them were from trolls and the remaining were positive messages.

“In 80 per cent of the feedback, both the communities — Hindus and Muslims — are happy with the trailer and they are looking forward to the film. The fact is that a trailer is a glimpse… That is not the whole movie.

“That is like a half of the story shown in 2 minutes from a 2-hour films. So instead of calling me pro-Muslim or anti-Hindu, I think it is wise to find out the whole story from the film,” Sinha told IANS here.

Featuring Rishi Kapoor, Ashutosh Rana, Neena Gupta, Taapsee Pannu and Prateik Babbar, and releasing on August 3, “Mulk” is a courtroom drama about restoring the honour of a Muslim family accused of treason.

After being accused of running propaganda to garner support and sympathy for Muslims through the film, Sinha hit out at trolls through an open letter.

Sharing the pity that he feels for trolls, Sinha told IANS: “Who are they? They are the youth of this country who are out of jobs and they are channelising their energy to become a professional abusers. These kids are undereducated and highly energetic with no productivity.

“Their restless energy has been misappropriated with something that they are told as nationalism. So now they live, breath, eat nationalism. It has become important to abuse anti-nationals for them. In reality, because there are not many anti-nationals who exist, they end up abusing those who do not adhere to their diktats.

“These kids are not well-informed about our political history, current affairs and just feed some wrong information that they believed as gospel truth.”

Then also arises the question if the media is maintaining objectivity while reporting facts or capturing reality with an agenda, and how it can impact what will be the history of tomorrow, he says.

“I think history is always a viewpoint, and so are the reports you are reading every day. You, as a reader, as the youth of the nation, should have the intelligence to interpret history in the right manner. Why do you read history? Because it has a relevance to our present and our future. So, while reading, one has to take away that much and rest has no relevance in our life or in the upcoming time.

“Therefore, history needs to be intelligently interpreted, and if anything, we are going wrong there I guess.”