By Aziz A. Mubaraki, 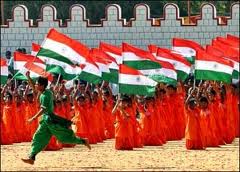 “So long as you do not achieve social liberty, whatever freedom is provided by the law is of no avail to you.” These were the words of Dr. Ambedkar as India adopted its Constitution. What would he have made of the state of India today?

India is hailed as the world’s largest and most vibrant democracy. The world is full of praise for the rule of law and democratic freedoms that are enjoyed only by India in its neighborhood. But I believe that democracy in our country is failing fast, as 65 years of democracy has failed to improve the lives of the masses in here. India has comprehensively under-achieved on all fronts; all that has changed is the skin-colour of the looters. Any criminal in the country can conduct in elections and the biggest part is that they win and become our MLAs, MPs and Ministers.

It was regrettable to see (on TV) the vandalism that occurred outside the district magistrate’s bungalow and circuit house in Berhampore a few week back, after the Minister of State for  Railways, Adhir Ranjan Choudhury gave a call to gherao the official residence of the same. Mr. Chowdhary is a central minister and this sort of behavior is neither appreciable nor acceptable from someone who holds such a dignified position. The vandalism of a government vehicle and the breaking of flower pots and furniture by congress workers outside the district magistrate’s residence were not only undemocratic but also a penal offence! If a central minister like Choudhury is seen pretermit such behavior then offender and troublers in our society will fell inspired to coddle in anti social actions.

But this deplorable behavior doesn’t seem to be restricted to any particular party or a state this has been the phenomenon throughout the country across party line. Almost all state governments show less respect for the law and public view too often. Some chief ministers act decidedly against anyone who raises oppugn or satirize against no matter even if he is as harmless as a cartoonist or a poor cultivator.

And with so the Successive governments have let down its people, both at the Centre and in the states. Poverty, ill health, sanitation, lack of housing, schools, food, water and dignity remain the main reality for most Indians. The State has become autocratic and we all remember how two young girls were arrested for a Facebook remark, whereas most of the tyrannous ministers got away with the most inflammatory speeches with action to reaction theory’s leading to the deaths of thousands in successive riots and pogroms in Gujarat or highly derogatory remarks by a deputy Chief minister of Maharashtra equaling water with urine recently.

A cartoonist, a professor or a doctor who merely claim their rights of free speech find themselves in jail when ministers who are accused of looting thousands of crores from the people and the land find themselves with tickets for Subsequent elections. Some Industrialists who poison the land and our waters are given “Life Time Accomplishment Awards” by the some of the same rapscallions who cheat the people. The situation is such that we can lose all our earning not in gambling or at race course but in Hospitals, by paying for carrying on diverse tests whether essential or not for diagnosing an illness, and for the 5-star comfort they try to sell.

We are required to pay for the use of Road even after paying Road Tax, Duties and taxes on vehicles we possess and for the fuel we use for running the vehicle. Where we are heading? What is the definition of a country now – Is it the geographical area with boundaries or perhaps people controlling that area? Each geographical area is being divided now -districts in to 2 districts, States in to 2-3 states all in the name of peoples aspirations, good governance , small is beautiful and the gravity for their province rather the love for the nation and that is leading to dividing the country.

Undoubtly it takes time for a society to evolve, thousands of years of monarchy & then colonial rule, all have oppressed people to evolve as rational & loud citizens. I felt this heat personally after 26/11 where I think we saw first time such an impulsive reaction from laymen, after our independence movement. Similarly we witnessed people outrage over cases like Priyadarshini mattu, Jessica Lal, Nitish Katara, Ruchika and most recently the Delhi rape case I believe this to be growing awareness of common people towards domineering deeds; powerlessness of the Government’s or others ! But then what’s the remedy to bring back things on track?

Here I completely agree with Press Council of India, Chairman, Justice Markanedya Katju who while addressing a symposium on “Reporting Terror: How Sensitive is the media?” organized by English daily ‘The Hindu’, said “Whenever a bomb blast occurs or such incident takes place, within an hour or so many TV channels start showing that an email or sms has come from the Indian Mujahideen, JeM or Harkatuljihad-e-Islam, or some Muslim name, claiming responsibility,” Katju added. “An email or sms could be sent by any mischievous person. But when your start screening this on TV and next day in print, the certain message you (read media) are sending is that all Muslims are terrorists and they having nothing to do except to throw bombs….You are demonizing the entire Muslim community and promoting communalism, “he added  “Is this the responsible behavior of the media? I think it is totally irresponsible behavior which is promoting communalism in the country. This is very bad”. And any sane individual shall not disagree with Justice Katju that a speedy germination of an unbiased communication technology & media can help democracy to move towards maturity with a great pace.

But then whatever the conclusion be, If this is not wake up time then I am afraid there won’t be one and in time we shall loose the very meaning of brotherhood, communal harmony and above all our democracy….