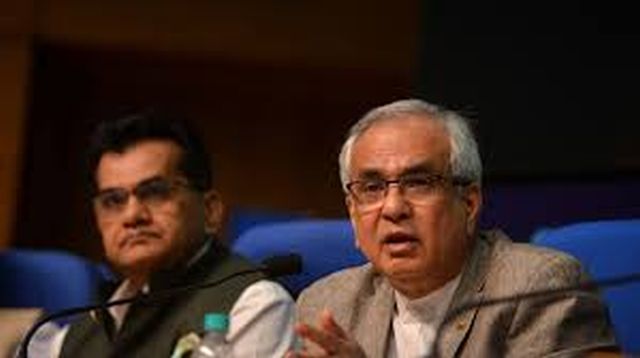 New Delhi : NITI Aayog Vice Chairman Rajiv Kumar on Tuesday said people have paid a “very high cost” for democracy in the last 70 years and it is now time to reap the dividends. He insisted that NITI Aayog, as a “principal change agent”, can help garner those dues.

“We have paid a very high cost for our democracy in the past 70 years. It’s very clear. Otherwise we could have…anyway. But now is the time when NITI Aayog will help us in earning the democratic dividend,” Kumar said in response to a query by IANS on how NITI’s role was different from the erstwhile Planning Commission.

“It is time to get the democratic dividend which would come from states competing for good governance and good delivery of public services and not by having competitive populism,” he said.

Kumar said that the Aayog is a “complete new entity” as compared to the Planning Commission because it works as “partners to the states” and not as “people who hand out doles to the states”.

“We, therefore, don’t hold durbars in the NITI Bhavan. I have actually taken the trouble and met Chief Ministers of 21 states in their state capitals. I visit them. Completely the reverse of what Planning Commission used to be,” he said.

Speaking about NITI Aayog not having any financial powers, he said it had the “power of ideas and the power to implement them”.

“By the way, some of my friends tell me that I have come at a wrong time when the NITI Aayog has lost all powers to disburse money. But we have got the power of ideas and the power of implementing those ideas, both at the central level and much more at the state level, trying to get them (states) replicate the best practices,” Kumar said.

“And here let me say — and this is my wish and hope — that if we go along the way we are going, on which the Prime Minister has been sort of directing us all the time to go, we will become one of the principal change agents in this economy,” he added.

He said that the NITI Aayog has the potential and the ambition to do it.

“We can bring the states on the same page, we can make them compete with each other,” Kumar said.

On the question of economy not creating enough jobs, Kumar said the allegation of “jobless growth” is “mithya” (falsehood) and has no substance.

He, in line with what the Prime Minister said recently, insisted that not enough data is available on the jobs.

Asked if the government is shifting the goalposts after four years by hiding behind the pretext of not having sufficient data on growth, Kumar said: “Not at all. We are not shifting the goalpost. My predecessor (Arvind Panagariya) had taken this up in a major way in the second year itself. It takes time to tackle such an important question.”

“The decisions have been taken, the financial resources have all been allocated. The Ministry of Statistics and Programme Implementation has already had a household survey in the field.

“The change in employment can only come when the first quarter is repeated in the 5th quarter. Then only you know the change Quarter-to-Quarter. Therefore it is taking time. But we will get the best data every year, not just once in five years,” he said.