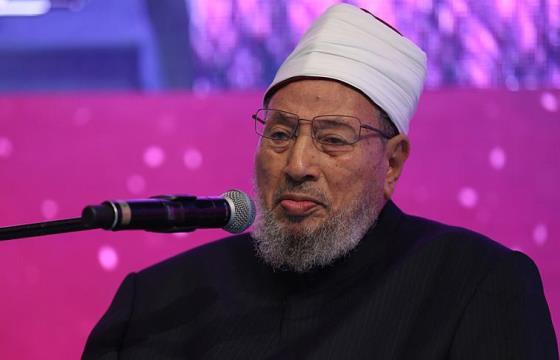 ISTANBUL :Prominent Muslim scholar Sheikh Yusuf al-Qaradawi has accused the West of plotting against Turkey to derail its advancement.

“Turkey is facing plots by those who don’t like to see this nation [rising] and by the West,” al-Qaradawi, the chairman of the International Union for Muslim Scholars (IUMS), told the opening session of the IUMS’s general assembly in Istanbul on Saturday.

“They would have succeeded [in their plots] but for Allah’s support for President Recep Tayyip Erdogan and his brothers,” he said.

“Allah will help Erdogan to emerge victorious as long as true Muslims are standing by him,” Al-Qaradawi added.

The IUMS chairman said the Islamic world has gone through many calamities.

“The Turks have been fought against because they defended the Islamic nation,” he said, going on to hail major developments in Turkey under Erdogan’s leadership.

Bringing together more than 1,500 scholars from around the world, the IUMS’s general assembly will continue until Thursday.

Election will be held during the meeting to elect a new IUMS chairman, secretary-general and his deputies and board members.

Al-Qaradawi also commented on the murder of Saudi journalist Jamal Khashoggi inside his country’s consulate in Istanbul.

“Khashoggi said he was not an opposition figure, but they [Saudis] didn’t accept that and killed him,” he said.

“Khashoggi was afraid to be jailed when he entered the consulate, but he did not think that there were people who would kill him and they indeed killed him,” he lamented.

Khashoggi, a columnist for The Washington Post, disappeared on Oct. 2 after entering the Saudi Consulate in Istanbul to receive paperwork he needed to get married.

Once inside, he was immediately strangled and then dismembered, according to the Istanbul Prosecutor’s office.AA