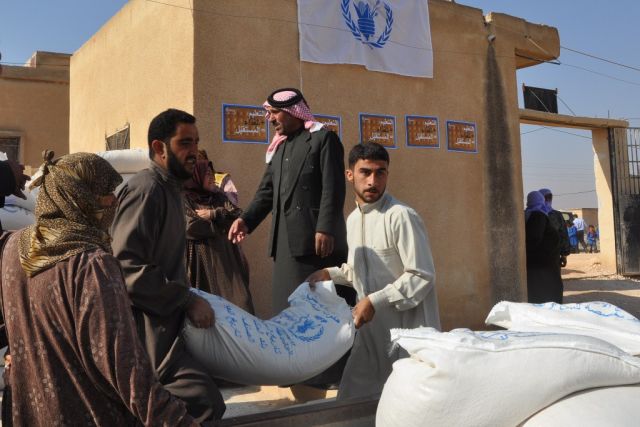 Damascus : The United Nations World Food Programme on Tuesday said it is delivering urgently-needed food across the Syria-Jordan border to assist thousands of Syrians uprooted from their homes since the launch of a government offensive to regain opposition-held areas in the country’s south.

The fighting in Daraa has led to the closure of supply routes, causing an increase in the price of fuel and other basic supplies. However, WFP is reaching affected families via the Ar-Ramtha border crossing between Jordan and Syria, in accordance with a UN resolution allowing the delivery of humanitarian assistance to areas not accessible from inside Syria.

“We had to run during shelling and destruction to get to this camp,” said Nidal, a man displaced from Lajat village. “We’re sleeping in the open air, under the trees, in the mosques and schools. Those lucky to find a tent have to share it with four or five other families. We need all the help we can get.”

WFP has so far delivered ready-to-eat food to more than 30,000 people sheltering in villages and makeshift camps. These rations provide enough food for one week and include canned foods such as tuna, chicken and beans that do not require cooking. To help prevent malnutrition in children under the age of two, WFP is also providing specialised nutritional products, the UN agency said.

Over the past week, nearly 50,000 people fled their homes in northern Daraa to escape bombardment, finding shelter in makeshift camps in the south of the governorate as well as in Quneitra governorate. Retaliatory shelling is also affecting the neighbouring governorate of Swaida.

“WFP acted quickly to assist the thousands of people displaced in the south who are in desperate need,” said Corinne Fleischer, WFP representative and country director in Syria.

“We’re ready to scale up to reach more vulnerable families through cross-border deliveries or from inside Syria if supply routes open,” she said.

WFP reiterated its call to all parties involved in the devastating conflict to allow immediate, safe and secure access to all areas in Syria, particularly those that remain under siege by warring parties.