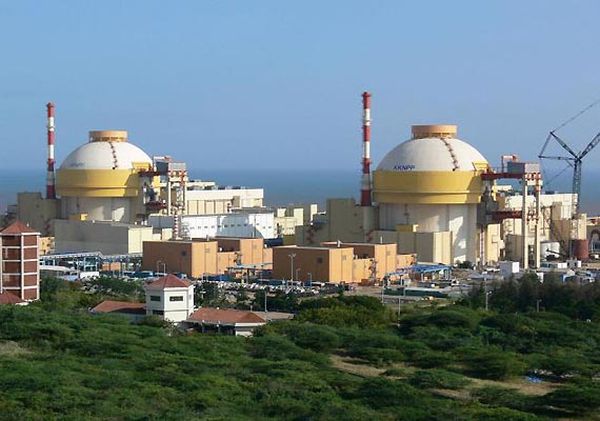 Rostov-on-Don (Russia) : The steam generator for the third unit of the Kudankulam Nuclear Power Project (KNPP) in Tamil Nadu is three months away from completion at the Atomenergomash factory around three hours drive from here, according to its Director, Maksim Jidkov.

Leading a party of Indian journalists on a tour of the facilities of this manufacturing arm of Russian state atomic energy corporation, Rosatom, Jidkov pointed to a generator vessel mounted high in the gigantic workshop measuring 300,000 sq mt. Rosatom are the equipment suppliers and technical consultants for the KNPP, the first two units of which have already been commissioned.

Being one of Russia’s biggest industrial complexes, Atomenergomash has 6 million sq mt of production facilities in this area of southwest Russia, in another part of which, at Sochi on the Black Sea, Prime Minister Narendra Modi met with Russian President Vladimir Putin on Monday without a prior agenda, “to further strengthen the special and privileged strategic partnership between India and Russia”, according to a PMO statement.

According to Indian officials currently in Russia, given that the unofficial agenda of the Modi-Putin meet in Sochi was to discuss the situation developing out of the US withdrawal from the Iran nuclear deal, Indo-Russian cooperation in nuclear energy was bound to have figured in the talks.

“The manufacture of the steam generator for KNPP-3 is at an advanced statge and only the last 3 months are remaining of a process that takes two years,” Jidkov said.

“The relationship with India is very important to us. The KNPP contsruction will improve our relations and we hope to have many more projects in India,” he added.

Atomenergomash Chief Executive Nikipelov Andrey said at Rosatom’s just-concluded 10th Atomexpo conference at Sochi that the transfer of technology for the third and fourth units of KNPP would start by the end of this year and the company hoped to finish the work by the end of 2019. He also hoped to sign the agreements for Kudankulam units 5 and 6 before the end of this year.

The KNPP’s 1,000 MW each units 3 and 4, being developed by the Nuclear Power Corporation of India (NPCIL), are expected to become operational by 2021.

Jidkov said that the company has a current order book of $60 billion and has set up units in various countries creating a nuclear capacity of 66,000 MW worldwide. Its equipment are currently in operation in 20 countries.

Atomenergomash has exported to Germany, France, China, India, Hungary, Bulgaria, Belarus, Turkey, Iran, Finland and the Czech Republic, among others.

Parent company Rosatom has many firsts to its credit like the first nuclear power plant at Oblelinsk (Russia) in 1954, the first experimental fast-neutron reactor in 1964 and the first nuclear plant in the Middle East in Bushehr (Iran) commissioned in 2011.

Besides nuclear equipment, Atomenergomash produces thermal power machinery, metallurgical, mining, oil and gas production and processing systems, including ready for use plants for deep processing of petroleum, equipment for the construction industry, for sea water desalination plants, containers for transportation and disposal of nuclear waste and biomass energy units, among others.

The huge production hall opens on one side to the company’s own mooring berth on the Tsimlyansk Reservoir, which allows shipping bulky and heavy products. After being transported by barge over the reservoir, the shipments take the Volga-Don Canal on to the Baltic Sea port for their onward overseas journey.

Rostov, on the Don river, has for centuries been a major shipping lane connecting southwestern Russia with the north. With the construction of the Volga-Don Shipping Canal in 1952, Rostov-on-Don became a port of five seas – the Black Sea, the Sea of Azov, the Caspian Sea, the White Sea, and the Baltic Sea.

(Biswajit Choudhury was invited to visit Russia by Rosatom. He can be reached at biswajit.c@ians.in)

Dalit Panchayat president forced to sit on floor during board meeting