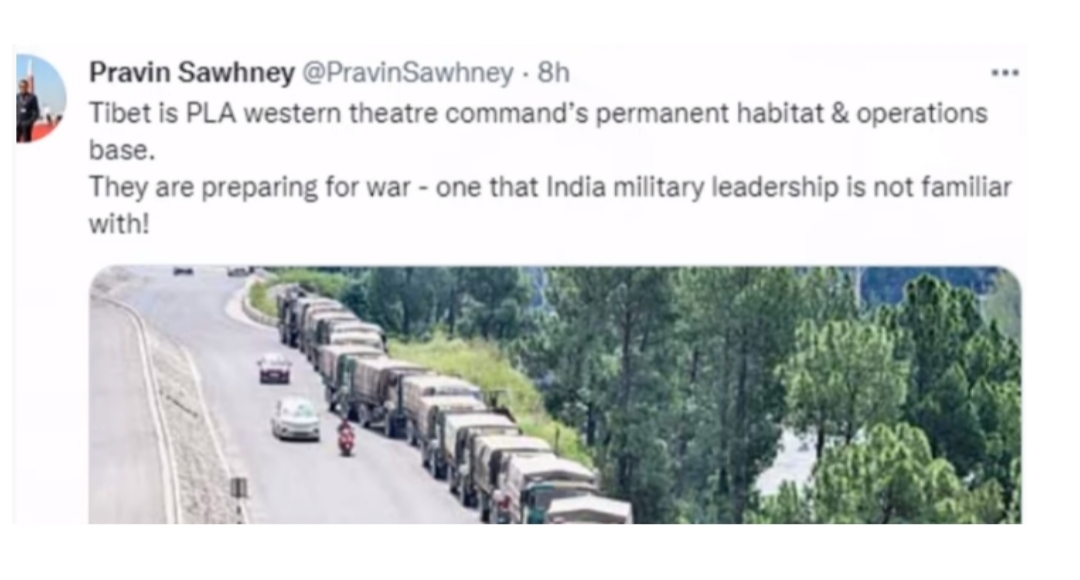 As India, remained ‘too-focused’ on the developments of Afghanistan, in the last few months, which of course, have not as yet ended to India’s interest, the real issue of ‘dragon-on-our-neck’, is all set to crop again, as and what was truly expected has happened! There is a renewed presence of Chinese troops on our Himalayas as South China Morning Post, on September 19 1 disclosed that ‘the Chinese military’s Western Theatre Command has introduced more night drills and brings in more advanced equipment close to Indian border The Chinese military’s Western Command has introduced more night drills for units stationed near the Himalayan border as it seeks to familiarise its troops with new-generation weapons and equipment.’ If this development has caught us unawares, it is to our naivety as China, which has been locked with India, in border disputes, since Doklam crisis 2017, has only capitalized its position, despite dozens of table-talks with India.

It can by now become clear for any onlooker that China, has been taking-full-advantage of the time consumed in talks with India, to buttress its infrastructure on borders close to India, but the big question is? Is India also getting ready to answer in the same coin? A new report from Telegraph India on September 20 2 suggests, that ‘China builds 10 new airbases along the Line of Actual Control in Ladakh, Uttarakhand and Arunachal Pradesh besides ramping up infrastructure at its exiting airbases close to the Indian frontier, sources in the security establishment have said. “Intelligence reports suggest the Chinese have built at least 10 new airbases along the LAC in Ladakh, Uttarakhand and Arunachal Pradesh. This is very serious considering the 16-month-old border standoff in eastern Ladakh ”. He said the Chinese army had earlier built additional military camps as well as watchtowers with CCTV cameras atop them inside India-claimed lines in Ladakh to monitor Indian troop deployment. It’s a matter of extreme concern the way they have been ramping up their military and air force infrastructure close to the LAC and also inside the occupied zones. “It’s apparent that the Chinese are bolstering their positions while talks are under way to resolve the border standoff”. India has been building 73 roads of operational significance along the China frontier, he said, but at a far slower pace compared with China’s rapid expansion of military infrastructure in the region.’

Apart from what China has done in Ladakh, Uttarakhand and Arunachal Pradesh, it has put all his forces on alert on Tibet front also. Pravin Sawhney, a very prominent defense analyst, on his twitter on September 20, has cautioned that ‘ Tibet is Peoples Liberation Army(PLA) western theatre command’s permanent habitat & operations base. They are preparing for war – one that India military leadership is not familiar with! The big question, is how long under the nationalist (sic) government of Narendra Modi, will India remain frozen inside the ostrich syndrome and keep on feigning ignorance on the developments vis-a-vis China? In the last couple of years, all what has been heard is that China has kept on fortifying its defenses on our borders and India is grappling to the condition of status-quo ante before to when the Galvan valley fiasco had happened in which India lost 20 of its soldiers. India is banking now overtly on US to have become a part of QUAD after it had signed BECA.

India was into for a further jolt as Kingdom of Saudi Arabia (KSA) Foreign Minister Faisal Bin Farhan visited India on September 19 and there were expected fissures, which were not to be, from KSA side, that Afghan-Taliban have acquired the government by force etc and a bash-up on Pakistan a call never to touch the Gordian-knot Kashmir, as India had abrogated Article 370, which gave Special Status to JK&L and had declared Kashmir to be fully a part of India on August 5, 2019, and that India just do not want anymore reference to the K word. But, all that did not happen. It may be needed here to mention that the abrogation of Article 370, however, has made Pakistan and China to carry it to UNSC for thrice in one year, informed The Wire 3.On the issue of and Kashmir, FbF said that with ‘regards to Kashmir, this is an issue that continues to be a dispute between two countries and therefore what we would encourage is that there should be a focus on a path of dialogue and discussion among India and Pakistan to resolve these issues in a way that can settle these concerns permanently,’ in an interview in The Hindu 4 . He paralleled the issue of Kashmir between India and Pakistan. Instead!

The visit of Saudi FM was perhaps more to give-a-cozying -message to Pakistan, rather than to engage with India, as there had already been long delays in the much pledged 100 billion USD investments, announced by KSA in 2019. It is interesting that KSA took Indian soil to declare that Kashmir is an issue between India and Pakistan. Such a big sacrilege and there hasn’t been any loathing of KSA on our media-houses yet? It is noteworthy to state that KSA had released a 20 Saudi Riyal bank note, last October, which showed Kashmir outside the purview of India, which KSA announced to withdraw later.

Perhaps, now KSA is also in realigning its polity, with the change of guard in US, and the way it had been into cross-hairs with Pakistan, over latter’s effort to make a counter-OIC as Pakistan accused KSA of abandoning Kashmir, which had then enraged KSA Crown Prince MbS, who sought his loan back from Pakistan and which Pakistan repaid with China’s help. Previously, Pakistan was considered as titular state of KSA and all what US wanted was to make KSA phone call and arm-twist Pakistan, but after the ‘absolutely-not’ statement of PM Imran Khan to US, Pakistan seems to steer clear of US, which also has alarmed KSA.

Pakistan no longer is in US mould, as China, is what holds-the-keys. China has announced to invest 15 billion in Pakistan Petrochemical sector, tells Outlook India on September 19 5. According to BBC on September 9 6 China has given 31 million USD emergency aid to Afghanistan too. It may be a matter of time that China and Russia and Iran too, on the cuddling from China, Turkey etc may be accepting AT government. The British Army Chief Nick Carter has already given positive-signals for AT

What would be interesting to mention is that FbF visit came after Imran Khan had called MbS, and it cannot be discounted that MbS sent FbF with a clear message, which upstaged our hopes, as KSA may be wary of further antagonizing China, as China after the Pakistan loan-return debacle, had stopped importing oil from KSA, and KSA had to become the third largest oil supplier from once what it was as the largest supplier of oil to the communist nation. MbS is yet to forge a personal-rapport with US new President Joseph Biden, and may also be trying to explore new strings with China at the cost of US. As perhaps, now China is what which call the shots.

India needs to be extremely careful.