The joining of Al Rumayyan to RIL can also be seen as a pre-emptive strike against the post-sanctioned entry of Iran to the Indian energy market.

Yasir al-Rumayyan is a multi-talented, globally renowned person in energy, finance and technology. He was the board member of Saudi Tadawul, Saudi stock market, transportation network company Uber Technologies Inc. Softbank and currently an important member of Prince Muhammad Bin Salman’s Vision 203 reform committee. It was he who increased the PIF’s wealth from USD 150 Bn to USD 400 Bn. His aim is to establish PIF as the world’s largest SWF by 2030.

Born in 1970, Al Rumayyan graduated from King Faisal University in Al-Ahsa in 1993, did general management program at Harvard Business School.

What does Al-Rumayyan’s RIL joining mean?

Completing the Aramco-RIL deal, hedging its energy interest, countering Iran in the post-sanction era and remaining relevant even if India diversifies its energy partner.

Announcing the appointment, Ambani said: 7“We look forward to welcoming Saudi Aramco as a strategic partner in our oil to chemicals (O2C) business. I expect our partnership to be formalised in an expeditious manner during this year,” setting a timeline for the much-anticipated investment by Aramco in RIL’s O2C business.

Obviously, Al Rumayyan’s association with RIL will give the company international recognition. Aramco would ensure a steady flow of crude oil to Reliance refinery, the largest one in the world and ensure better returns to RIL shareholders. A predictable flow of crude oil at reasonable prices would ensure  high and sustained margins on petro-products both in domestic and overseas markets. While, in return, Saudi Arabia would be able to strengthen its foothold in India’s big energy market, counter Iran and maintain its position vis-a-vis US and African countries such as Nigeria, Ghana, and Cote d’Ivoire.

In 2019, Jamnagar Refinery (RIL) was negotiating to sell its  20% share to Aramco at USD 19 Bn but due to some reasons the deal could not be finalized. Now, with al-Rumayyan’s entry to RIL the deal looks on track.

India and Saudi Arabia want close political and economic relations. Despite differences, both countries have many similarities as well as endowments to establish complimentary than competitive economic relations. In recent years, both countries have come close in defense and security matters too. Their challenges and potential are common to ensure their mutual security and defense partnership. Like India in South Asia, Saudi Arabia is also a leader in the Gulf such as the largest economy, largest territorial area and globally being one of the largest oil depositors with a relatively higher shelf life, in the world.

In the economic field, both countries have launched the diversification plan –Saudi Arabia launched Vision 2030, while India, Make in India and recently Atma-Nirbhar Bharat (Self-reliant India) — offering huge reciprocal investment opportunities. It is well noticed that reciprocal investment is much below the potential of both countries. India’s infrastructure offers more than a trillion investment opportunities in the next five years, while Riyadh offers around USD 900 Bn opportunities.

The signing of the Strategic Partnership Agreement (SPA) in 2009 not only widened the canvass of cooperation but also opened the prospects for better mutual understanding and trust between the two countries. 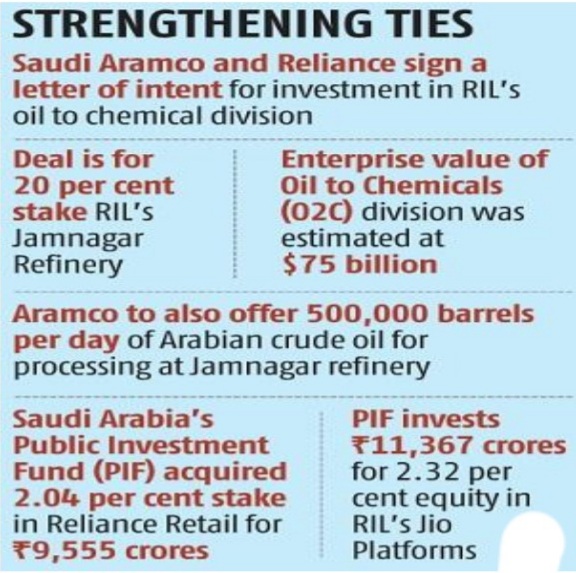 Being the birth-land of Islam, the Kingdom has a deep natural strategic depth in 1.6 billion Muslims. This makes Saudi Arabia a natural ‘contact point’, helpful in managing the Islamic world. Being the second largest home of Muslims, India needs Saudi Arabia to manage Muslims. Any call from Saudi Arabia produces a deep impact over Indian Muslims.

Riyadh and New Delhi see each other eye to eye to intimate their ties but there are some issues, including regional ones that force them to move cautiously and slowly.

The two visits of PM Modi to Saudi Arabia and the first stand alone visit of the Crown Prince to India in 2019 have been defined as a beginning of a new era in strengthening bilateral relations and developing mutual trust and understanding between the two countries.

The recent agreement on Yoga which demands India to send Yoga experts to train Saudis shows that the two sides are also interested in deepening their five millennia old people-to-people relations.

The potential Saudi Arabia holds forces me to call the Kingdom the mini-US in the Gulf.

However, some crucial reforms are due. Without this, it would be almost impossible for the Kingdom to harness the full potential of one of the youngest nations of the world.  We all know what those Mandatory Reforms are. Respecting the sentiments of 1.6 billion Muslims is one of the important one them through which the Kingdom seeks its legitimacy and prominence, otherwise we also know that the age of Hydrocarbon and Petrodollars are numbered.