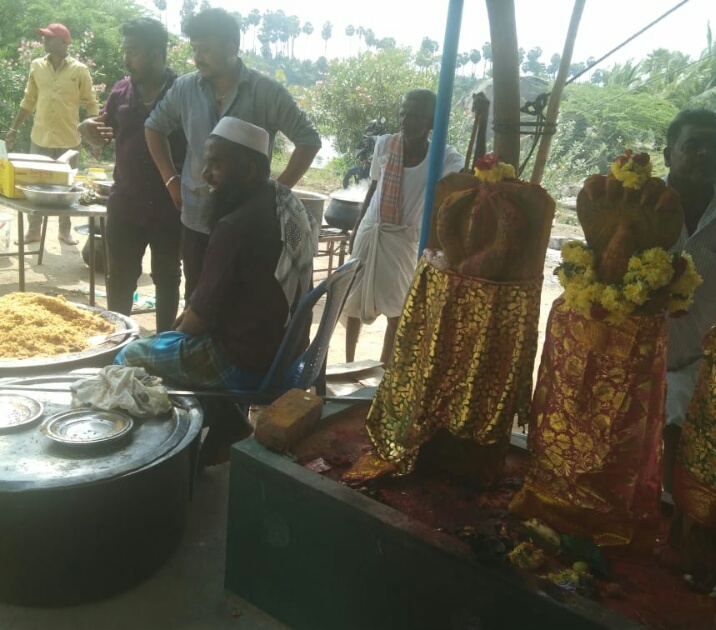 Muslims generally eat halal meat rather than other types of meats. This is because according to Islamic law, one should only eat halal food as per directions given in the Holy Quran. Many think that halal means clean or hygiene. But that’s not the actual case. The true meaning of halal is completely different in this case. To summarize, halal refers to the prescribed way of slaughtering animals in Islam.
The etymology of ‘halal’ is derived from traditional Arabic language. Halal is cutting the neck area of ​​the animal to the nerve, which leads to pain. Prior to cutting in this manner, they would say, ‘Bismillahi Rahmani Rahim Wallahu (In the name of Allah the most merciful)

One may ask what is the benefit apart of this Islamic tradition. When the cattles are slaughtered in the halal manner, every single drop of blood in the cattle is discharged. This prevents the spread of pathogens through the blood.

In case of Hindus, ‘Jhatka’ method of slaughter is widely practiced but even a large number of them regularly eat halal meat in restaurants and other places.

Hindus have no restrictions on halal meat but some people in North Indian regions like Punjab, Hariyana, prefer only jhatka. In case of meat consumption we can broadly divide Hindus from North and South India because usually Hindus of the northern region prefer to have Jhatka type of meat or else they are satisfied with the halal type too. But when it comes to family functions or Village Utchav, Hindus firmly go for Jhatka meat on the basis of Hindu traditions with poojas before slaughter, which isn’t negotiable. But it is not the same case with the people of Dravidian states especially Tamil Nadu and Kerala.

Hindus of these states mostly prefer to buy halal meat in Muslim stalls, which they preferably call as ‘Kasap kadai’ in local accent. One may say this is common for Non-Muslims to prefer halal food but it isn’t the only case but it is also been followed in other feasts like house, ancestral and traditional functions as a matter of social harmony. In South India, Hindus hold family functions like Kaathu kuthu, motta function, Kaariyam and so on. Kaathu kuthu is a widely celebrated family ritual where newly born child undergo ear-piercing ceremony where the relatives and friends are invited for a big meat feast. Usually the cattle is slaughtered in Jhatka way but in recent decades people have started adopting the halal way of slaughter as a symbol of social harmony.

We attended one of a Kaathu kuthu festivals in Pachayamman temple of Kaveripattinam, Tamil Nadu where it was an ear-piercing ceremony of Mr. Mani and Ilaya whose family had invited us. Not to our surprise there was a Muslim man with skull cap who was seated in front of the temple to serve Biriyani to the guests. Just for the countable number of Muslim guests who had been invited they have ordered halal food. When I asked the locals of the village they said this is an act of social harmony that even Hindus prefer halal meat. This is not just one instance but such developments are regularly witnessed in Hindus of South India. They do the same thing on the occasion of ‘Kariyam’ the funeral ritual of Hindus in Tamil Nadu.

On top of that even in the Village festival or Utchavam of Hindus the village heads who hold feasts prefer to serve halal foods for the villagers. For an instance there is a village named MalayandaHalli in Krishnagiri, Tamil Nadu where were invited by one Mr. Rajesh for Mariyamman festival which happens once in 5 years. As we entered the village we could see a sizeable number of people around the temple and village area regardless of faith and culture. While we were having our lunch a Muslim family came and sat near us. They never asked Mr.Rajesh whether the meat was halal or not, nor the villagers told them about it. This understanding and resistance, still act as a key of unity of those villagers. The hospitality and social harmony of the Malayandahalli people was really heartwarming and it is an example of socio-cultural exchange that [sometimes] leads to the approval and preference of halal foods among the Hindus of South India. This is also one of the prominent reasons why even in rural areas of South India, Hindus invite people across the village regardless of faith for meat feast by usually requesting a man with skull cap start with the Halal slaughter of the cattle and then they do with further proceedings. Thus halal has become widely used slaughter method across the several lands especially South India.

BJP, AAP supporters back meat ‘ban’, Congress voters against it