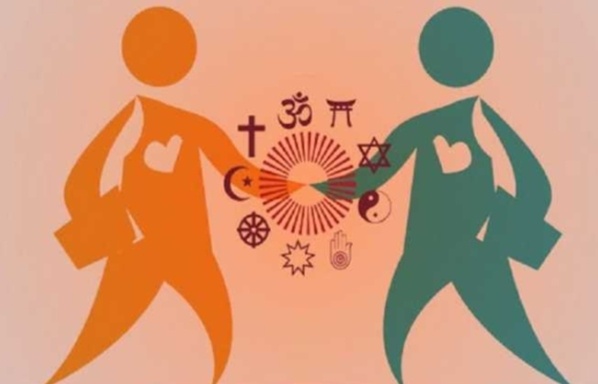 By Dr. M A Mufazzal

Our society, in general, has always been a heterogeneous community since antiquity. The people here are bound together by shared goals and ideals ‘in a way that does not necessitate homogeneity in dress, dietary customs, belief systems, or even outward religious observance. This is essentially an underlying process of dialogue which may potentially enhance the quality of life and contribute to the well being of civil society. Notwithstanding the prevalence of this innate process of dialogue in Indian society, it appears very unlikely that the diversity itself, being religion at its core becomes the potent force for disintegration and disunity creating political and social unrest. It has rather become a tool for violence. Expressions like ‘the other’, ‘diversity’, ‘multi-religiosity’, ‘religious other ’, ‘and multi-faith ’, ‘sacred other’, ‘people of other faith’ are frequently used. Living side by side with people from different religious background and culture who believe in a God or gods, who has the same belief as ours that we are “superior” and that our system of belief is better than theirs, we are often being challenged. In the midst of these confusions as to which belief system/faith is better, which one is the way to the Truth, we now forget the values our religion holds- its core teachings and practices and resort to drawing lines that makes the differences even more prominent. This existence of deep religious diversity and plurality as a distinctly present day ideology has become a modern day warfare making it a threat to the society.

To improve and repair the damage caused by the pernicious polarization in the society is a critical matter. However, amidst these paradoxical challenges the interfaith dialogue seems instrumental to achieve the equilibrium point of social cohesion. But there are some prior questions need to be addressed. What holds human society together? Do we need any social or cultural dialogue? Do we need to accommodate the ‘other’? How do we relate with a person who worships a different god? Can we cross the barrier of differences and coexist as one? Because at the core of every religion there is a sense of superiority and exclusivity and breaking that barrier makes one feel less sacred.

The utilitarian approach or the Darwinian principal of natural selection failed to bring social cohesion as it ends up in measuring the usefulness of social constituents including people in terms of their economic value. Thus, the competitive market economy naturally selects fewer to become the driving force and leaves the majority at the bay.
On the other hand the Nussbaum’s narrative of fear and anxiety has been traded in the context of what she termed as the ‘new religious intolerance’ so much so, that media has appropriated ‘religion as threat’ not only to the society but to the state as well, when the matter comes to “securitization” of religion. This view held religion as responsible for or at least the underlying current for much of the violence and traded on the narcissism of fear and anxiety being run counter to a healthy and peaceful society. Amidst the dilemmas, interfaith dialogue has much to offer as it opens up the gateways for the renewal of trust and deepening of bonds across difference and diversity in a society like we live in. Whenever people of different faith and traditions come across for the purposes of broader understanding they are making an intentional decision to accommodate each other. This can’t rule out the fear of certain vulnerability and recognition that following the exchange things will not be the same. This is arguably because the process of interfaith dialogue tests participants and practitioner’s willingness and capacity for self-critique.

Interfaith dialogue invariably offers the ways to deal with differences and diversities. It is also requires a certain level of vulnerability of participants in a way that they together can grow in understanding and appreciation of both commonalities and differences. At the core of this process is the challenge of valuing our diversities.

Talking about coexistence and living in peace with one another almost all faiths and traditions hold the similar principle of coexisting and are challenged to move beyond to accommodate the spiritual, cultural, social and religious elements of the ‘other.’

Every day is an interfaith engagement in a community or a global village like ours and engaging in interfaith dialogue does not in any way mean undermining one’s own faith or religious tradition. Indeed, interfaith dialogue is possible and constructive only when people become firmly grounded in their own religious traditions and through that process gain a willingness to listen and respect the beliefs of other religions. One cannot judge the ‘other’ by its color, creed or religion, it is in the way of how we coexist together and learn from each other’s tradition.

Since pluralism reigns supreme for the present day, a dialogical mindset becomes the essential tool for cohesion in an inter-religious community like ours. The basic principle within all religion prioritizes unity and oneness, it teaches about love, compassion, peace, non-violence and to live in harmony with humanity and with nature. It is important that we use these as tools or means for dialogue and peacemaking. Because drawing resources from the intra and inter community of spiritual and cultural traditions will indeed fray discrimination and ignorance and hold responsibility towards peace building and value the differences. Therefore, social cohesion and harmony in relations to interfaith dialogue/relations as an informed discipline can also add towards a better understanding of conflict situation and support our society that can affirm religious dignity.

These understandings could be instrumental to construct a multi-layered policy and practice structure, in which policymakers, stakeholders and practitioners can help contribute towards making interfaith dialogue more effective. They require developing a conducive policy context and merely leaning on multicultural, assimilationist, or passive set of approaches by themselves does not turn out. Instead, the dialogues with a focus on the importance of policies and practices may potentially support the recognition of the contribution of different groups, whilst also helping to address inequalities between groups and promoting intercultural and interfaith exchange.

The process of the dialogue is extremely crucial, and supporting this process may encourage people to get involved and produce the most positive outcomes. One of the best ways of doing this is by considering the importance of the individuals, organizations and networks that contribute towards facilitating this process and help overcoming the obstacles. The contributions of “Idea of India” (IOI) (a Mumbai based organization), Indialogue Foundation, Sarva Dharma Samvaad etc. in this respect are commendable.

There is a felt need to provide consistent support to their activities, helping them to reflect with policy-makers on the difficulties inherent in their role and ensuring that their relevant programs and projects continues over the longer term. The upcoming peace summit on “Manthan for Aman” by “Idea of India” (IOI) in this series would be a progenitive step towards making a fertile interfaith dialogue. Together, all these aspects provide practical arenas where policymakers and practitioners may create huge impact in developing the conditions favorable for fostering fruitful interfaith dialogue.