Muslim Mirror
Home India Why not have a peace ceremony at Wagah Border every evening as...
Facebook
Twitter
WhatsApp
Email
Telegram 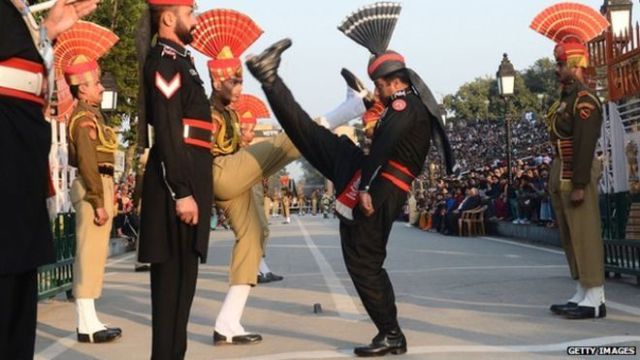 A US president once said: “peace is not the absence of conflict, but the ability to cope with conflict by peaceful means.” Our job is to find those means. In an attempt to suggest new alternative ways to ease tensions between two countries through citizen engagement/integration/assimilation from both sides, why not modify Wagah border retreat ceremony which occurs every day before sunset to represent “machoism” through rapid dance like maneuvers to some more meaningful event?

It should not be limited to symbolic handshake of soldiers but a place where hearts meet, eye gesture talk more than actual “Zabaan” between people across the border. Engaging citizens from both sides of the border is the key aspect.

Despite all the political differences, the citizens of both countries share the same culture, same language, same dress, same weathers, same festivities and same traditions which connects them together. They share the common history till partition. Not only this engagement will help them to heal the wounds of partition but also provide a platform to share their individual journey throughout these years.

In democracy public opinion towards any issue drives government to take firm decisions. If citizens will have better understanding about each other across the border then political vultures cannot use jingoistic measures to fool people.

The centrality of the idea is to ease tensions and vanish differences between common people across border. We propose to construct a peace stadium in place of BSF lounge and Guest gallery at Wagah. This is going to be a collective effort as both countries will have to agree upon this idea. The activities in peace stadium are meant to have a culturalcum people meet because culturally people make strong bonds.

Everyday events should be held. The goal of everyday events is to develop common interest centers (Delhi Haat Model) for people. Various retails stores of local goods should be opened. This could include food items, hand looms, embroidery etc. Both countries are culturally rich and very familiar with each other’s fondness with local items. It should be encouraged to have local manufacturer rather than MNC’s. Duty free shops of local goods like Jaipur lehnga, banarasi sarees, Lahore shawl and many more can be opened in that arena. So that everyday people across both sides could meet and discuss in open atmosphere.

Also there are various events that can be done on everyday basis like:

The proposed arena has a potential to be developed into a landmark place of partition History of two countries. Once in a month there should be a scheduled day when the musicians/poets/shayars across both sides will come to Peace stadium and perform to heal the wounds of people. Also once or twice we can organize sports events consisting team of mixed people from both countries as players.

There should be two layered security arrangement from each side. First it will be covered by Joint security forces then there will be another security channel of that respective country.