Muslim Mirror
Home Editor's Pick Why the Bhagya Laxmi temple is a Carbuncle to the beauty of...
Facebook
Twitter
WhatsApp
Email
Telegram 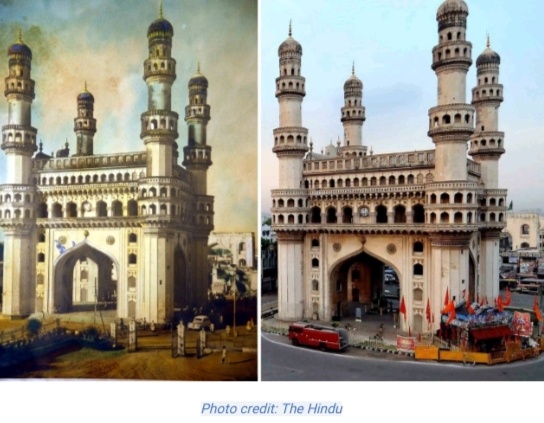 Although the word (Char) in Urdu symbolizes the numeral Four, and (Minars) as Minarets, which the icon of Hyderabad Charminar holds high. But it’s the English word that gets accentuated out of Charminar is “Charm”. Reminiscing its grandeur and beauty, one can simply awe at the magnificent sight of the structure, which is an adornment to the city of Hyderabad. Built by Quli Qutub Shah, of the Qutub Shahi Dynasty in the 16th century. The Indo Saracenic style monument was erected to commemorate the beginning of the second Islamic millennium year. The monument also holds a Madrassa (Islamic school) on the first story used during the Qutub Shahi era and a Mosque on the second floor along with 45 other prayer places.

The Monument has been in controversy related to the illegal construction of a temple in 1960 on the Southeast side of the minaret. Historians claim that one of the guard stones similar in shape to a milestone near Charminar was painted in saffron colour in 1965 and an old woman begging for alms was appointed to look after the stone. After a collision with a government bus that damaged the stone, a concrete structure was then erected, and further additions like the roof and other structures have been constructed over time, to see it in its present form today.

The riots of 1979, 1983 took away 45 lives and left many injured, and the violence of 2012 was a series of events that have triggered since the aftermath of the construction of the temple. The archaeological survey of India (ASI) claims that the structure is illegal, and it has no historical evidence whatsoever or proof for its existence before 1960. The body has also been sending letters to the district administration to remove the illegal structure since it does not hold any kind of power to take any course of action.

A case has been registered, and for the last 60 years, it has been impending in the High court of Telangana, and hardly had any progress in recent years. The court after the riots had ordered to maintain the status quo of the temple, to not expand it any further. Since the Judgement of the Babri Masjid, A historical enigma that had the significance, relevance, and world attention came down in 1992. And an arguable judgment passed by the Supreme court in 2020 to construct a Temple over the Mosque; It should have been more likely that a decision about the Bhagya Laxmi temple had accompanied sooner, to gratify any kind of justice which the Indian Judicial system could have exerted to showcase true spirit and pluralism.

The decision to allow an illegal structure that has no historical significance or legitimacy to carry full-scale ritualistic activities when a case is pending in the High Hourt. In comparison to the court’s decision of disallowing Muslims and Hindus both to carry out prayers at the Babri masjid premises since demolition; shows a lack of sagacity from the courts of India in holding justice and equality. It can be quite rightly argued that why are activities being allowed to carry out at the Bhagya Laxmi temple and spread this wrong notion among people when a case has been registered to prove its legitimacy.

The preponderate delay in the Judgement means: The more politicized, the issue has already become. The site has been used as a politically motivated move to extol Hindu nationalistic sentiments by promising to construct a bigger temple at the controversial minaret of Charminar. It was clearly witnessed during the campaign for the 2020 GHMC elections, when Amit shaw’s and Yogi Adityanath were venturing into Telangana politics, championing the issue of Bhagya Laxmi temple.

The issue is not about the illegal structure being a Temple. Had it been a Mosque or Dargah, it would have still been a carbuncle to its beauty. Obstructing its charisma, Charm. It makes its opulence look rather cheap in appearance. And makes one of its minarets look insanely obsessed and coloured full of saffron and debauchery, while the other three hold the dignity of an original artifact made to look like a beautiful structure full of poise and benevolence.

In a county where historical monuments are sparsely preserved in the condition; they were supposed to be preserved and maintained. And are only to be left for some cunning Godmen and God women to find a comfortable spot under their shade to paint it with saffron or green, and spread a false belief to earn their living by collecting alms from the tourists. We could argue whether the historical monuments in this country are safe and have the alacrity to be preserved. Can we imagine an outlandish idea of constructing a small church underneath the Statue of Liberty or the London Bridge or the Eiffel Tower? What would the stance of the government for those people, who carve out such ambitious ideas? and would they even fiddle around with this thought.

The decision to take off the Bhagya Laxmi temple should be taken as soon as possible. As it has been historically proven that the temple didn’t exist from the time of its construction and there are well-documented pieces of evidence from historical maps of Hyderabad, journals, and newspapers, and as well as old and rare photographs. The solution would be to grant a separate piece of land to the Bhagya Laxmi temple on any government land away from the restricted zone of Charminar.

There are enough Masjids, Temples, and Churches in Hyderabad. But there is only one Charminar: The Jewel of Hyderabad. So, let’s see to it that keep it ever glaring beauty alive and preserve the historical design, structure, contours, colour, and grandeur like how it was once made to look like. So that people from across the globe can come and admire its “Charm”-in-air.

The columnist holds an MSc in Engineering from the UK and can be contacted at sas_beck@hotmail.co.uk

The plea of the heritage structures of Hyderabad