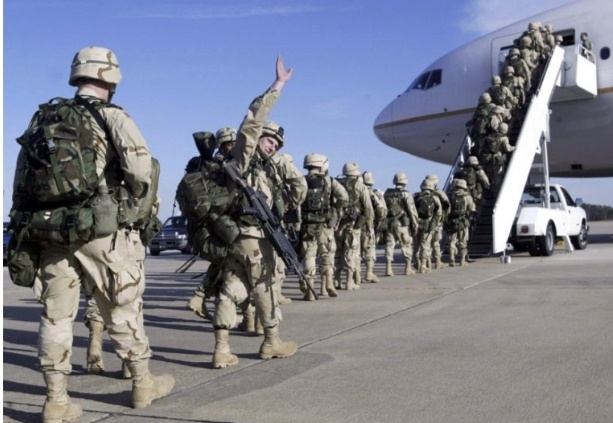 As the build-up to the November 3, 2020 US elections is taking place, there is a growing a speculation, which is now a million dollar question, in the real sense of ‘idiom and word’ – will the US leave Afghanistan fully?  Perhaps Not!

Nowhere in the world there could ever be a sight where US soldiers are ‘packing-their-bags’ to fly back home after entering into a peace-deal with the same people they have trained their guns ;  on  Afghan Taliban along with 40 other nations for 19 years! The ill-strewn dressed-up Afghan-Taliban fighters made the world super-power ‘scurry for cover’ and US president Donald Trump has finally announced US troops to be back by Christmas, something which Pentagon does not want. The experts are left in a quandary as to when Pentagon and the US establishment does not want it so, why is US president Donald Trump so hell bent to withdraw? The answer lies in a study, which however, has almost got missed from the pubic gaze,  that around  5,00,000 US military men who have at sometime served in Iraq or Afghanistan have been diagnosed with Post Traumatic Stress Disorder!  An entire generation in US has been ruined by such a fruitless wars and the US public wants an answer to it. The story has been highlighted on ncbi.nlm.nih.gov on October 4, 2016 and Trump had to make a political issue out of it, for which he had finally, on September 8, 2020 (TOI) 2, crossed the proverbial rubicon by saying that Pentagon wants to keep the war contractors happy!

Why would Pentagon, even at the cost of Donald Trump reputation would like to vacate the Bagram Airbase, Jalalabad, Afghanistan, which is by no means a mini-city by all standards. A YouTube documentary by SSB Dateline, published on May 12, 2019 3 , details the luxurious inside life of Bagram Air Base, in Jalalabad, about 70 kms north of Kabul which is in about 5000 acres of land, i.e. an area of about 20 kms , and which had about 20,000 US troops stationed inside for two decades.   The Airbase had ‘everything to replicate the comforts of home’. It had a FreedomRadio station, Burger King, Dodge Challenger and Harley Davidson showrooms, a shopping mall housing every product which US soldiers could have bought back home, it had Beauty and Spa and even a hospital and Credit Cards swapping centres. To summarise it had everything which gave an air of a slice of home. There were around 4000 civilians from Russia, India and Pakistan who worked there as coffee boys and cleaners etc.  This Airbase has now to be vacated. To also inform, this was the same base which the Russians had used against the Afghan-Taliban and now after US evacuation guess who is likely to settle into it? China, but as a friend of Afghan-Taliban.

This Airbase was no ordinary as Trump had visited it and spent time with US soldiers, US Ex. President Obama, George W Bush Junior and Afghanistan president Hamid Karzai had all been visiting it, but now US has a future plan, as it has envisaged BECA with India which will help US to formulate its strategy to contain China, Pakistan as well as Afghanistan so why would then US leave Afghanistan? Perhaps never as US will not like to be placed as a fool in the first place to forsake its stranglehold in Afghanistan and is likely to rent-the-war to its private army Blackwaters who will keep the fight alive with Afghan-Taliban along with Tehrik-e-Taliban Pakistan and remnants of Ashraf Ghani government along with India which under BECA will surely like US ‘giving-a-reply’ to China and Pakistan in case they to for a war against India,  as that would mean a war with US, under BECA.  This airbase is then going to help US as it from here when once the US fighters had flown to gun-down Osama Bin Laden, in Pakistan, a claim which has been termed as ‘hoax’ by Trump, on October 13, 2020, informed WashingtonPost  as Trump has said that the one who was killed was Osama’s body-double! Creating yet another storm in US polity, but this statement from Trump is a proof enough of the swordfight between him and Pentagon. Trump is even ready to malign the US most coveted trophy! To drub his opponent Joseph Biden.

Meanwhile, either Trump or Pentagon or both have given yet another proof as to  how a promise or a deal is reneged as on October 18, 2020, SputnikNews 5  informs Afghan-Taliban saying that the latest excessive US airstrikes on non-combat zones in Afghanistan is a violation of the Doha agreement (signed between Afghan-Taliban and US on Feb 29, 2020) after a powerful blast occurred outside police headquarters killing 15 in FerozKoh in Ghaur province and US has called to be ‘consistent’ with the Doha agreement,  reveals VOANews  6 .  Ashraf Ghani government high-official Abdullah Abdullah had visited Pakistan and India lately, and right now Taliban Ex. PM for twice Hekmatyar in on a three-days visit to Pakistan, to speculate about the growing probability; if US is not going to vacate Afghanistan fully,  on any other pretext whatsoever? As that would obviously mean Afghanistan permanent descent into chaos forever, even when US taxpayers had to pay more than 2 trillion USD on it until 2019! (SmallWarsJournal, September 12, 2019)

Will US attack Pakistan from inside Afghanistan?