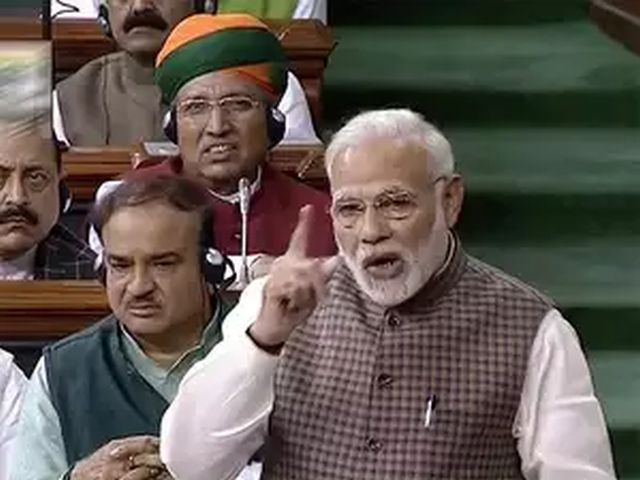 There are three aspects of Prime Minister Narendra Modi’s speech in parliament — which was probably his most combative in recent times — that deserve attention.

First and foremost is the undeniable fact that he is today by far the most effective speaker in Indian politics. His oratory has the potential, therefore, of carrying the Bharatiya Janata Party (BJP) well ahead of the others.

It is such attributes which can have a seminal impact on events. It may not be inappropriate to mention in this context that but for Hitler’s rousing eloquence, the Nazis would not have become — albeit for a decade — the force that they were in Germany.

However, the success of such declamation lies in a one-sided articulation of a viewpoint devoid of nuances and marked by a blindness to the possible flaws in the presenter’s own case. But more of that later. For the present, it is worth noting the second feature of Modi’s speech, which was an unrelenting focus on the Congress to the exclusion of all other parties.

What this approach emphasised is that despite the Congress’s present weakened condition, it is still perceived by the BJP as a major threat. A corollary to this perception is that the BJP’s dream of a Congress-mukt Bharat or an India without the Congress will not be easy for the party to achieve.

What is more, the Prime Minister’s speech was a pointer to the political reality that at the national level, a virtual two-party system has come into being in India. The two leading parties may have their allies but, notwithstanding the latter’s influences in their local areas, they are no more than appendages to the two main players with little possibility of replacing the two top parties at the Centre.

However, a caveat is necessary at this point. It is that the clout of today’s BJP is entirely due to Modi. There is no one else in the party who can take his place. No one can say with certainty how the BJP will fare if he is dislodged. The present primacy of the two parties is heavily dependent, therefore, on personalities (in the Congress’s case it is the Nehru-Gandhis) rather than on their respective organisations.

The third aspect of Modi’s speech is the stress on the Congress’s — and, as a result, on the country’s — past, since the history of the 132-year-old party is intertwined with Indian history since well before Independence.

As it is, the past played a major role in the BJP’s politics considering that its elevation into the mainstream of Indian political life from the margins was based on raking up the depredations of Muslim invaders in medieval times, including the destruction of temples and the building of mosques in their place such as the one in Ayodhya in 1528 on a site regarded as the birthplace of Lord Ram, venerated by Hindus.

From the 16th century to the 20th was but one step for Modi when he put the onus on the Congress for the partition and all that followed, including the division of Kashmir. Modi’s contention that the division would not have taken place if Vallabhbhai Patel was the Prime Minister in place of Jawaharlal Nehru was no more than a surmise, but what it underlined was the BJP’s current game plan of denigrating at every available opportunity India’s first Prime Minister.

The disparagement of Nehru began in Ram Nath Kovind’s first speech as the President when he omitted the first Prime Minister’s name from the list of those he mentioned, which included Deen Dayal Upadhyaya, the Hindutva brigrade’s latest icon about whom little is known to the average Indian outside the Sangh Parivar.

However, nothing showed the bias of the saffron brotherhood more starkly than Modi’s refusal to credit Nehru with the establishment of democracy in India since, as he said, democratic principles have marked the country’s polity since the time of Lord Buddha.

Even if, for argument’s sake, this point is conceded, it would have been interesting if Modi had dwelt on the teachings of Buddha’s disciple Emperor Asoka about tolerance — “one should listen to and respect the doctrines professed by others” — when a BJP MP, Vinay Katiyar, was reiterating M.S. Golwalkar’s diktat about Muslims having no right to live in India when they have carved out of the subcontinent two homelands for themselves — West Pakistan and East Pakistan (now Pakistan and Bangladesh.

True, the Congress has much to be ashamed of — dynasticism and corruption being the foremost among them — but for a Prime Minister to be so ahistorical in his outlook as to believe that the Congress’s earlier electoral successes were based solely on the weakness of the opposition and help from the NGOs is odd, to say the least. History is as complex as the reasons for the choice of the people of one party over another.

As a matter of fact, Modi undermined his own case by devoting virtually his entire speech to a party which he thinks should listen to Gandhi’s advice to disband itself.

(Amulya Ganguli is a political analyst. The views expressed are personal. He can be reached at amulyaganguli@gmaill.com)